Film - Universal Monster Collection: The Phantom of the Opera 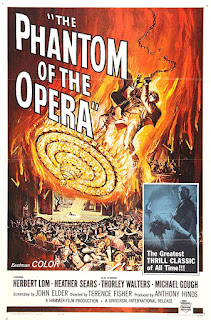 Daniel White dug through his vast horror film collection and is now rewatching a box set of classic monster movies from Universal. For his next Universal Monster of the Week, it's The Phantom of the Opera...

Long before Andrew Lloyd Webber turned Gaston Leroux's novel into a musical, there was a film version that has all the essential elements of the stage hit, minus all the singing and other such flamboyancy. The 1962 version of The Phantom of The Opera is rightly seen as the definitive cinematic retelling of the story and yet it is almost impossible to watch it now without adding in the Webber penned musical hits. This is unfair to the film and the performances of the key actors, in particular a wonderful performance by Herbert Lom as The Phantom. It could be argued that the musical actually moves away from the horror genre and lands the plot firmly in dramatical romance. The film has no love interest and the character of Raul, so prominent within Webber's work, is absent. In his place the hideous character of Lord Ambrose D'Arcy the playwright and operatic composer whose work is being performed at the London Opera House.

Hammer Studios was given a budget of £200,000 for Phantom but, actually, it ended up being made for double this. The hiring of over 100 musicians and ensemble actors for the operatic scenes would have contributed to this with the result being a greater sense of depth and character to the film. Whilst there is no doubt that The Phantom is still undoubtedly a murderer, his motives derive more from Lord D'Arcy actions than purely from an obsession with Christine. The Phantom's past is not shrouded in mystery either and the back story to D'Arcy's betrayal play front and centre throughout the entire film's duration. Webber's Phantom is portrayed as obsessive and driven to acts of murder as he loses Christine to Raul but here Lom's Phantom is a failed and cheated composer who was hideously scarred because of an accident and is seeking revenge. 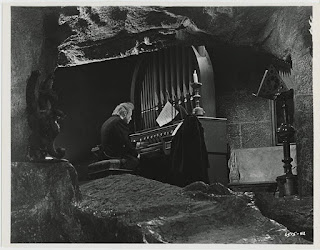 Phantom of The Opera is remembered for one scene which still has the ability to transfix and chill the blood. Lom's disfiguring makeup effects are astonishing and the horror on Christine's face as he turns from playing the pipe organ is understandable. But it is inner disfigurement that is the true horror as betrayal has rotted his mind just as effectively as acid has destroyed his face.

What both the musical and the film do share in common is The Phantom's almost paternal care for Christine, albeit more romanticised the musical. We witness The Phantom protecting Christine from the unwanted advances of Lord D'Arcy and offering to train her voice. His final selfless act of protection costs him his life and as he is impaled by the fallen chandelier one cannot help feeling that the wrong person has paid the price for the greedy and selfish society he lived in. I have no doubt that, at some point, some well-meaning Director will attempt to bring the non-musical version of Phantom Of The Opera to a modern audience but I would suggest that nothing can surpass the tragic beauty of the 1962 version.