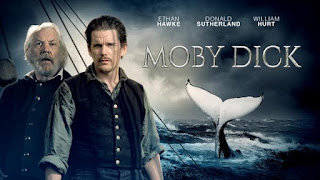 Coming to Amazon Prime next month, watch a trailer for the 2011 two-part mini-series, Moby Dick...

William Hurt, Ethan Hawke and Donald Sutherland star in this miniseries based on the 1851 novel by Herman Melville.

After years of being tormented by a white whale that swims the ocean, Captain Ahab (Hurt) sets out in search of the 600-foot prehistoric creature, tricking a crew of men to accompany him on his fateful mission.