CLASSIC DOCTOR WHO ON BRITBOX – The Seeds of Death 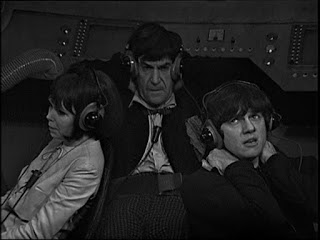 On 26th December 2019, 627 pieces of Classic Doctor Who content were made available to Britbox subscribers. Every Sunday in 2020, our Doctor Who expert, Tony Cross, looks back at some of the classic stories. Here is the Second Doctor adventure The Seeds of Death...

The Seeds of Death is the Ice Warriors' tribute to The Cybermen as they attempt to invade the Earth via a Moonbase. This time though rather than a Gravitron we have T-Mat. T-Mat is the teleportation system that the world has come to rely on for all transport of all people and goods over long distances. This is, of course, barking mad. But let's just assume humanity loses its mind, which wouldn't surprise me on recent evidence.

The Ice Warriors have spotted the weakness and opportunity in T-Mat and thus begins their cunning plan. It does begin with murder. Murder and resistance. And then more murder, escape, and collaboration, which brings me to Fewsham (Terry Scully). Fewsham is unusual in Doctor Who - actually so is Phipps (Christopher Coll) - in that they react to the murder and horror around them in normal human ways: fear, shock, and nervous exhaustion. Fewsham doesn't want to die so he collaborates with the Ice Warriors until the point he can collaborate no more. Phipps escapes but the constant terror almost brings him to the point of a nervous breakdown, which Zoe isn't only mildly sympathetic about. Both Scully and Coll put in fine performances but whilst Fewsham's death is a kind of justification poor old Phipps dies almost un-mourned. It's a classic example of what I've mentioned before, the utter inability for Doctor Who to allow proper grief.

There's also an architect out there somewhere who designed the T-Mat base on the Moon and then - I hope for sanity's sake - never worked again. The heating controller is the wheel from a small ship marked with big science-fiction television series labelling just in case you get a bit confused. The base has corridors within corridors. It has a room with mirrors. I mean who project managed this stuff? Who got bribed?

Then there's the Ice Warriors plan being dependent on a plant that is destroyed by water when invading the Earth. Now, to their credit they're aware of this and try to stop weather control from turning on the rain by knocking out weather control but if you knock out weather control by shooting its control system wouldn't it just revert to natural weather? Perhaps the fungus, which breeds like rabbits, will do its job so quickly that humanity won't be able to save itself.

The fungus is, of course, a combination of foam and balloon seed pods. And, by Jove, there's a lot of foam in this story, which leads to one of my favourite moments as The Second Doctor falls through the door into Zoe's arms at the beginning of Part Six and Wendy Padbury starts giggling at the site of the stumbling foam covered Patrick Troughton. It's still there and it is rather lovely.

The Ice Warriors are still slow, hissing stumblebums but Brian Hayles has got around this slightly by introducing Slaar (Alan Bennion) who is an Ice Lord. He's less tortoise, more lizard. He's in charge. He gets most of the dialogue and is easier to understand. The Ice Warriors are visually impressive, which the director, Michael Ferguson, takes the most advantage of when filming one of them out on Hampstead Heath.

I have left out my normal paragraph of praise for Troughton because it really I can't think of a time when he's not superb. There's some joyful stuff in this story probably capped off by his reaction to the foam and the famous: "Your leader will be angry if you kill me. I'm a genius."*

Hines and Padbury too are up to their usual standards, although I do think on occasion Zoe acts far more stupidly than her characters intelligence and training would make you assume she'd act.

There's some fine support work from Louise Pajo as Miss Kelly**, who the key T-Mat technician without whom no one would seem to be able to put the system back together, which is surely a case of putting a basket of eggs in one basket already full of eggs; Ronald Leigh-Hunt as Commander Radnor and Philip Ray as Professor Eldred.

I'm particularly enamoured of the fact that these futuristic men turn up in the PVC onesies carrying bog standard 60s briefcases as if, instead of getting off T-Mat, they've just stepped off the Bakerloo Line.

Anyway, I've kind of picked at the flaws of this story much more than it deserves. It is too long; it is pretty much a bog-standard Troughton story. You could swap in the Cybermen with a couple of tweaks and you probably wouldn't notice but it is elevated I think by Fewsham, Phipps, Miss Kelly and Professor Eldrad: the ordinary people being extraordinary.

*Actually, I think this line gets additional oomph from the brilliantly timed reaction of the actors playing the Ice Warriors.

**Who, for me, is up there with Wendy Gifford as Miss Garrett in the Ice Warriors in terms of beautiful, technocratic women. It's almost as if Brian Hayles has a type.