Marc Nash may need to wash his hands after watching Sex Education on Netflix...


Due to writing devoirs, I have never been able to commit to TV series, whether keeping up with weekly episodes or binge-watching. I had neither Netflix nor Amazon Prime, mainly because I’d never get much return on my subscription. But I happened to have sent off my latest completed novel a week before we were all confined to barracks, so suddenly this devil is facing an idle block of time on his hands. I can indulge what most other people do, even though we are temporarily deprived of a water cooler to gather round and make ablutionary oblations to our TV gods.

Having heard Alistair Petrie who plays the school headmaster on the wireless talk about how much fun the show was to make, plus the fact that it had Gillian Anderson in it, I plumped for giving “Sex Education” a whirl. And I learned a lot, although not about the subject matter on show. More about things like production values and scripting for series, that the extra-terrestrial TV world has ushered in. Extra-terrestrial not as from outside our galaxy, but outside the 5 terrestrial TV channels, oh you know what I mean right?

Okay, so on to the drama. Fifth or possibly Lower Sixth form at school, a lot of hormonal teens and Otis (played by Asa Butterfield) is a virgin with a gay best friend Eric (Ncuti Gatwa) and little prospect of getting his end away, since he has had a sexual hangup ever since his father walked out on him and his sex therapist mother (Anderson). School nympho Maeve (Emma Mackey) is an outsider, living on her own on a caravan site (UK equivalent of trailer trash), but despite being a genius, she is always on the look out for money to keep the gas canister heating her caravan filled. The two come into unlikely orbit when Maeve overhears Otis talking down a schoolmate’s sexual crisis and calculates that the two can go into business and charge for doling sex advice to their peers. Credulity-stretching factor one; that Otis has apparently imbibed his wisdom just through growing up in a house of sex therapists, despite us being shown that his mother protects the privacy of her clients’ sessions. Credulity-stretching factor two; that Otis who is so sexually repressed, is completely unburdened when it comes to talking to others about their hang ups and is able to meet every query no mater how far out and exotic. Credulity-stretching factor three; that there could ever be any attraction or chemistry between Otis and Maeve which is played out for the entirety of the two series as a ‘will-they-won’t-they’ get it together, frustrated at every turn by the whims of fortune and teenage slights, grudges and betrayals. There is one unstated thing that does link them, Otis’s mother is also rather partial to copulation as Maeve is, did someone say Oedipal? 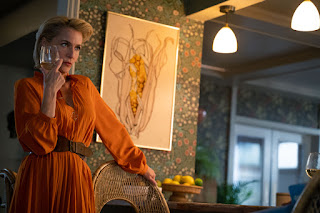 Despite the weakness of the central conceit, there is quite a lot to admire about the show. First off of course, is Anderson’s performance, physically channelling Meryl Streep with a platinum blonde side-swept updo hairstyle and played with delicious ice maiden crispness. She combines with aplomb, both the neutral analyst and yet the superior looking down the nose at one and all. Many of the young actors portraying schoolkids are really good as well and the writing is quite remarkable at choreographing developed storylines for each of the 20-30 characters that weave in and out throughout the series. We get to feel for most of the characters who each face their personal dilemmas and challenges. The penultimate episode of the second series was really rather moving, as Aimee who was rubbed against in a crowded bus and traumatised from ever getting on a bus again, finds herself in detention with many of the other girls who are sniping at each other over entangled relationships with boys and bursts into tears as her trauma rears its head. Each of the girls in turn shares their experience of being perved on and finally they find some solidarity and it’s really quite poignant when the next day they all turn up at the bus stop to help Aimee overcome her dread. I also just want to give props to actor Connor Swindells, who carries off the role of Cro-Magnon bully and headmaster’s doomed to falling short of expectations son Adam Groff with a real maturity, saying so much of his inner turmoil without saying many words at all. His storyline is perhaps the most cliched of all, but he makes it credible.

The show is incredibly shiny in its colours and lighting and verdant countrified setting. It also has a rich diversity of sexual orientation and ethnicity on screen, but such a combination does make me wonder where in the UK this is supposedly set (there is only one restaurant in town), which manifests such diversity. The filming mainly took place in Wales, but no one has a Welsh accent, though every other accent is on display. And though it’s some decades since I was a student and even then was never invited to those sort of parties, the flagrant sexuality on show here is a million miles away from my school. Though the very first episode starts off with sex and nudity, pretty soon all episodes have the sex pretty much clothed. But there’s no escaping the question, who is the target audience for this exactly? Surely not only for middle aged men to perv over some exposed young thespian flesh? Yet would actual sixteen year olds watch this and recognise themselves enough to laugh? I have no idea. But then in mitigation, one considers the wonderful soundtrack which for me was the highlight of the piece. Devo, Violent Femmes, Richard Hell And The Voidoids and top credibility points for Delta 5’s “Mind Your Own Business” means that the writers of this show, or at the very least those providing the soundtrack, are also my age, so they’re just as culpable as any middle aged viewer, since they produced this stuff in the first place. Though again, such a late 70s soundtrack prompts the raised eyebrow as to just when is this supposed to be set, seeing as all the kids have smartphones and exist in a modern day moral sensibility of safe spaces and intersectionality.

So a reasonably enjoyable bit of nonsense, with a few highlight moments, but no belly laughs. I think the ensemble nature of the whole endeavour was the most commendable takeaway I had. That and hearing Delta 5 and Richard Hell on TV.