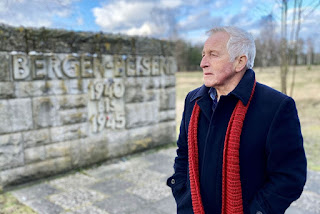 A new documentary comes to ITV on 7th April as journalist Jonathan Dimbleby focuses on the horrors of Nazi concentration camp Bergen-Belsen, 75 years after it was liberated by Allied troops...

"Those words, 'I walked into the world of a nightmare,' have always haunted me. They were spoken by my father 75 years ago, in April 1945. He was a BBC war correspondent, accompanying the British Army as they fought their way across Europe, towards Berlin. And the nightmare he was referring to was Bergen-Belsen, the first Nazi concentration camp to be liberated by the British." - Jonathan Dimbleby

The 60-minute programme features Jonathan retracing his father’s footsteps because Richard Dimbleby was the first broadcaster allowed into Bergen-Belsen after it was liberated.  The radio reports his father Richard sent back are now ingrained into the British consciousness as a document of the systematic mass murder undertaken by the Nazi regime.

In the programme, Jonathan visits the site in Germany where a reported 70,000 Jews, gay men, gypsies and foreign prisoners died. It was eventually burned down by British troops to avoid disease spreading - and now principally consists of memorials and mass graves, along with a remembrance museum. Joined by a survivor and the daughter of a survivor, Jonathan explores the grim history of what became one of the last concentration camps to be liberated in 1945.

Alongside powerful archive and Jonathan’s own thoughts and recollections, the film includes emotional reactions from survivors and family members to what has happened in the 75 years since it was liberated, and reflections on the recent rise of antisemitism as a prominent issue.

Belsen's huts, fences and watchtowers were destroyed by the army, but Jonathan and survivor Tomi Reichental, who was nine when it was liberated, visit the site of the hut where he was kept - number 207. Tomi said "This is where I was, yes. And I recognise it, it’s just incredible. I know the position, how the hut was, where I was in the hut. That was the entrance in this side. And our room was on the right side. And when we went out to the roll call we saw these skeletons walking around. We had a green area for playing. So when we saw one of those skeletons falling down we would stop playing and watch what would happen next. Because if one of these women got up, we knew she had another day to live. But most of them never got up. We saw it every day."

Belsen historian Rainer Schulze says Bergen-Belsen started life as a prisoner of war camp in 1940, so the first to enter were French and Belgian. Then in 1941 it became a Soviet prisoner of war camp, and they died under the most gruesome circumstances. Belsen was already full when, from December 1944, a further 85,000 victims began to arrive. Jonathan explains most died because they were neglected and starved, and caught diseases, unlike at other concentration camps. He said "At Belsen they didn’t line people up... Shoot them and throw them into pits, they didn’t exterminate them in gas chambers as they did in Auschwitz. At Belsen they were killed by the inhumanity and barbarism of the Nazis."

Survivor Mala Tribich, who was 14 when the camp was liberated, added "There were bodies being brought all day long, so they’re bringing them on carts but they were exposed, dead bodies with limbs hanging either side. But then these carts after a time gave up. And it ended up in someone pulling a naked body by a limb along the road and then just shoving it into this place. It was quite horrific."

By the time the camp was finally liberated on April 15, 1945, it had become a hovel of disease and desperation. Scottish soldier Ian Forsyth said "I was 21 when we liberated Belsen and that changed my life completely. We saw these high barbed wire fence with these turrets spaced along and a crowd of - how can I describe it? - skeletons with flesh on them."

Yet there was only so much the soldiers could do to help - other than to disinfect the survivors, and offer them water - as the scale of malnutrition was such that giving them food might kill them. Ian went on, "We gazed at them and they looked at us. And we couldn’t resist throwing something over. And that of course was the worst thing that we could have done. We didn’t know it at the time, but I regret it now. Because I know that anything that we threw over the person who eat it would die."

For many, the psychological wounds of what they had experienced and seen at Belsen went deep and sometimes never healed. Belsen scarred the survivors, their families and it scarred their liberators, and Jonathan says like many others, his father never spoke about it to him.

Soon after the war, many survivors of Belsen found their way to Israel - a newly established nation which preferred to look forward than back. Liora Danieli, the daughter of a Holocaust survivor who visits Belsen with Jonathan and Tomi, says: "I grew up in Israel in the '60s. It was a big shame to be a survivor, or a child of a survivor, especially from concentration camps. I used to ask my mother when I was very young, 'Why aren’t you talking?' She said, 'If I talk I won’t be able to keep on living, the memories will kill me.'”

Until now, Liora has deliberately stayed away, but the urge to see the place which has loomed so heavily over her family became too strong. It is a testing moment, and she gives her first impressions, saying: "Depressing. The day my mother was liberated, she finished her first fight to live. She realised she is alone, no family at all. It takes a lifetime to get over these experiences of the camps."

Jonathan explains that the voices from Belsen, so quiet for so long, are now being heard with a sense of growing urgency as they diminish in number and anti-Semitism and racism seems to be rising. Belsen survivor Anita Lasker-Wallfisch concluded that "The logic for me is that if they had killed us all, there would be not a single witness. We are the voices for the people who are lying in these mass graves."

This is a MultiStory Media production for ITV. Return to Belsen is on ITV on Tuesday 7th April at 9 pm.