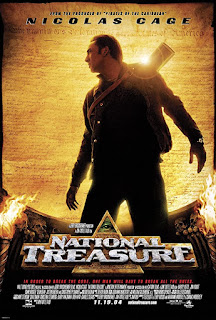 With limited releases on new films and a period of isolation on the go, Steve Taylor-Bryant is going back through his older DVD collection and watching things he hasn’t viewed for a while to see how they hold up. Today it's not just one but BOTH National Treasure films...

In times of crisis, whether personal or global pandemic based, there is something to be gained from watching films that are familiar, that you may have viewed hundreds of times before, but that bring you comfort in the dark days that either you or humanity in general are facing. I tend to turn to action and adventure films, a good guy defeating all the odds to prevail in his chosen mission is a good sentiment to aspire to in an uncertain time and what better guy to turn to than a swashbuckling historical specialist in search of iconic items of the mythical past. You guessed it… Benjamin Franklin Gates! Oh, you were thinking of Indiana Jones. Well, he is pretty cool but it's Harrison Ford playing Han Solo against the Nazis again and he just did that in Star Wars didn’t he? Plus, ya know, snakes. The Indiana Jones films are great, don’t get me wrong, I am not going to sit here slagging off films that filled me with joy as a kid but, let's face it, I am a grown up now so I prefer my history seekers to chew a bit more celluloid scenery and look like they could go into an epic Nic Cage style rant at any moment, so I am of course rewatching National Treasure and National Treasure: Book of Secrets.


Both films together are something rare for Walt Disney, great non-animated films that grown ups can watch on their own and pretend they aren’t watching a Disney film. In fact I had to double check they were indeed released by Disney and not thrown out by Touchstone or [insert any other studio Disney now owns as I have lost count] but Disney it was which means it's wholesome fun we are going to have but that isn’t necessarily a bad thing. I’m all for actual grown up adventure films but when you cut down any violence and cursing to get that prestigious Disney logo on the poster you have to rely on more old-fashioned filmmaking techniques… like good writing. And before you start @’ing me on social media go and rewatch National Treasure and point out the parts that aren’t good writing? You can’t, can you? No, so shut up and watch Nicolas Cage steal the Declaration of Independence from under the nose of Sean Bean and sit there in your wrongness. Because that’s where the good writing comes in; whilst a treasure hunt may not be wholly original and treasure hunters may be a well-trodden trope, what they do in both National Treasure films, certainly more than most, is they use real life historical items and places in which to bury the fantasy so that the entire family can enjoy the film together. I know what the Declaration of Independence is, I know the significance of the document, I can name most of the signatories, and I love the history but my slightly more grown up kids also know, and my younger ones have looked at important things like the Declaration in their early years history classes. We all know the importance of not stealing something so valuable and then looking for a map on it! So we all know that Gates (Cage), his sidekick Riley (Justin Bartha) his accidentally involved and inevitable love interest Abigail Chase (Diane Kruger), and his ‘sick of his family's bad name’ father (Jon Voight) are really doing the right thing by stealing it and keeping out of the hands of the wicked and dastardly hands of Howe (Bean). Along the way just to make sure our heroes don’t go too far and that our villain will eventually go to jail (that’s right kids, in a rare turn of screen events Sean Bean survives this film because, ya know, Disney) is a lawman like no other, the F.B.I. agent and Masonic secret keeper Sadusky (Harvey Keitel before his insurance salesman days).

Eventually the treasure is found and shared with the world, which is right thing to do, our heroes are exonerated of any wrongdoing and all is right in the world. I’ve had the plot to a Dan Brown book but written better and played out by Nic Cage of all people and my kids have had a history lesson without knowing it proving history can be fun. 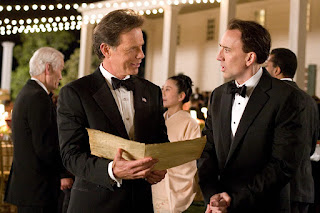 The second film couldn’t involve a real-life document of such significance so had to up the ante somewhat so had a President (Bruce Greenwood) instead. If you cant steal the Declaration of Independence I suppose the next best thing is to kidnap a sitting President in front of the Secret Service and then discover a conspiracy nut's dream hidden in the Library of Congress before dismantling part of an historic monument in the shape of Mount Rushmore looking for the secret hidden City of Gold that is Cibola. National Treasure: Book of Secrets follows a similar path to the first but with Sean Bean swapped out for Ed Harris as Wilkinson, but takes in a bit more of the globe, more historic papers, items, and places (the Buckingham Palace scene is one of the best scenes in cinema history, you already can't @ me – see above) and takes a headlong bigger dive into conspiracy theories than the first whilst treading a fine line with historical accuracy. I know some people don’t hold the candle for Book of Secrets that I do, and I don’t mind that, it just proves they don’t like Helen Mirren and they have to live with themselves and that knowledge.

I just hope that now Disney have finished buying the entire film industry that there is enough money left for the much touted National Treasure 3, I hope that Jon Turtletaub is back at the helm as director, I hope every writer from both films gets involved again, and I hope they find some way for Nic Cage to still be the star but hand the franchise off to someone younger so we never, ever, ever find ourselves in Indiana Jones and the Kingdom of Crystal Geriatrics Looking For A Last Pay Day territory.

In short, your honour, I quite like the National Treasure films.