Audio - Doctor Who: The Chimes of Midnight 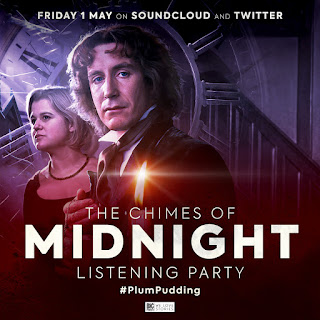 Social media listening parties are all the rage just now and the first one to be hosted by Big Finish will be happening this Friday when everyone’s invited to listen and tweetalong to a free audio stream of Doctor Who: The Chimes of Midnight...

On Friday 1st May at precisely 7pm (UK time), the very first Big Finish listening party will get underway, with a free livestream of Doctor Who: The Chimes of Midnight, the Doctor Who Magazine poll-winning audio drama starring Paul McGann as the Doctor and India Fisher as his Edwardian adventuress companion, Charley.

'Twas the night before Christmas, and all through the house not a creature was stirring...

But something must be stirring. Something hidden in the shadows. Something which kills the servants of an old Edwardian mansion in the most brutal and macabre manner possible. Exactly on the chiming of the hour, every hour, as the grandfather clock ticks on towards midnight.

Trapped and afraid, the Doctor and Charley are forced to play detective to murders with no motive, where even the victims don't stay dead. Time is running out.

For the duration of the listening party, this entire classic four-part Eighth Doctor audio adventure will be available to stream for free on SoundCloud, so that Doctor Who fans worldwide can join in and listen together simultaneously. (Of course, people who have previously bought the story may prefer to listen to their own personal CD, download or vinyl copy.)

Meanwhile, on Twitter, writer Robert Shearman and star India Fisher will be tweeting along, chipping in facts and memories of the story using the hashtag #PlumPudding. (obvious hashtag when you think about it)

How to join in:

At 7pm (UK time) precisely on Friday 1st May, press “play” on the SoundCloud playlist stream of Doctor Who: The Chimes of Midnight here: https://soundcloud.com/big-finish/sets/plumpudding/

(If you’re listening to your own copy at home, there will be a short interval between parts 2 and 3, so you can swap the CD, turn over the vinyl, or take a comfort break [it's two hours long in total - Ed].)


DOCTOR WHO: THE CHIMES OF MIDNIGHT
Originally released: February 2002.