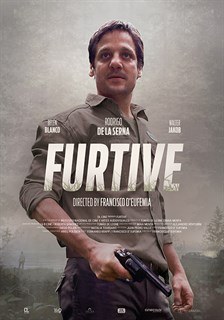 Al Acecho is an Argentinian film, directed by Francisco D'Eufemia and starring Rodrigo de la Serna as Silva, a Park Ranger who was caught up in something shady but is now trying to start afresh in Pereyra Park. Everything seems to be fine. It’s quiet. But Silva stumbles on a poaching ring and then things get interesting.

Initially we think we know who Silva is. We think he’s the good guy, but then things get complicated. Silva might not be who we thought he was. It’s a film with the greyest of shades of grey. Even at the end when we think we know who he is there is a hint of further complexity. If this film reminds me of anything, and it seems an odd comparison considering the disparity of location, it is Get Carter.

Like a lot of this type of character Silva seems like a difficult man to get on with. We never know whether he cares for anyone, apart from himself, except for a fox in a cage and, possibly, Camila Marquez (Belén Blanco). Camila is one of only two women to get any lines in this film. She’s what passes for love – or lust – interest. Belén Blanco is good and as the film goes on you do get the impression, based on his actions, that Silva does care for her as much as he cares for anyone.

It’s difficult to explain the fox. It spends almost the entire film in a cage, something that Francisco D'Eufemia says reflects the condition of ‘a man in uniform’. But it is the fox that will be an essential part of Silva’s motivation. It’s as if he’s doing all of this to save the fox.

The film has long periods when things seem quiet, interspersed with tension and violence. The violence isn’t graphic particularly, but it is short, sharp and it feels real. That reminded me a little of the films of Takeshi Kitano.

Rodrigo de la Serna is excellent as Silva, which is a good thing as there isn’t a scene where he doesn’t feature. He’s a solid presence and manages to convince you that there is a real human being here with complex motivations. He’s in a new Netflix series, La Casa de Papel [AKA Money Heist - read Kraig's article on the series here - Ed], which I might look at based on the performance.

Also, worth noting is that the setting, Pereyra Park, manages to feel natural and claustrophobic. There is something prison like in the trees and the empty crumbling buildings. It seems to be a film about cages within cages. Is it possible for a film set in all that green to be a film noir? You could imagine a film like this made in the 1940s with Bogart as Silva.

This isn’t an action film; this is a film about character and worth a watch if you get a chance. It takes a little time to settle, but it sucks you in and holds your attention until the final moments.