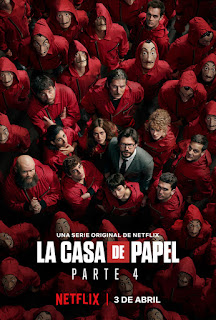 With Season 4 of Money Heist due to premiere on Netflix on Friday, Kraig Taylor-Bryant steals a look at the Spanish crime thriller...

What’s the best thing about Netflix for you? Is it being able to easily view a variety of content when you don’t have the time to go to the cinema, or perhaps the numerous Netflix originals that can be accessed at a reasonable price? For me it’s the foreign film segment of it, the films that were made in Mexico like the award-winning “Roma” or the TV shows that are made in Spain, of course I’m talking about Money Heist.

One of the things that kinda threw me off the show (so to speak) at the beginning was the choice to dub over the Spanish with English voice acting; to me when I watch something foreign it’s good to know that it’s foreign, when you’re reading the English subtitles throughout. However after watching this show for 3 seasons (or “parts” as they’re referred to as) the English dubbing kind of helped give the show a charm of its own, like in those lazily animated kids shows, I stopped looking at the characters lips as they forgot to match the words being said, and instead focused on the whole picture, the performances and facial expressions, and I have to say the acting does not disappoint.

The show promotes itself to be similar to those old heist films we’re all familiar with (such as Reservoir Dogs), where you have each member of the heist crew referred to by code names but, instead of colours, each member of the main heist crew here is referred by a city name. The story starts from the perspective of Tokyo, a character who, for what feels like the longest time, even we the audience didn’t know her real name. Surprisingly though it didn’t matter because the people she was forming relationships with didn’t care either, because it was her rebellious personality that both myself and clearly the characters on her crew grew to love. And we also have Berlin, who from the start seems charismatic, kind and a good people person when it comes to calming the hostages, though it’s only when he gets too close to one of the female hostages (non-consensually), that we begin to see him in a whole new light.

Following those two we have Moscow, and his son Denver, and their relationship stuck out for me the most, hearing about how Denver was always picked on by others growing up, and never had an easy life, helped to provide a light into how some criminals are created by the society we live in. And then there is Rio, who is a very fun-loving person who seems to represent the youth of the group, having Tokyo as his first love kinda forces him into a position to make mistakes during the heist, kinda helping us feel sorry for him. Which then leaves Nairobi and Helsinki, the team who seem to delve deep into the work to forget about their struggles, which we learn more about as the story unfolds. 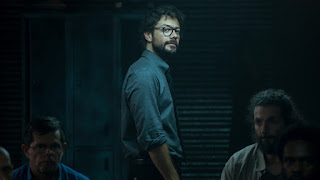 And who is the mastermind behind all this? Well who else would be better than a professor, a man smart enough to plan for every circumstance, every eventuality, perhaps not an actual professor but certainly a man smart enough to have the qualifications to become one. However, this “professor” promotes himself to be smart enough to know about the corruption of bankers and political leaders, which forces him to decide to steal from the “Royal Mint of Spain”, but in order to do so comes up with a specific set of rules for his crew to follow. The first being no emotional attachments, the second being “No names” with us as an audience only on rare occasion hearing each character’s name, and lastly no killing, as the professor believes their actions are to be inspired by Robin hood, they intend to play themselves off as the good guys, and as the show goes on, we learn more about how each bank robber was made a victim of their society, and the professor chooses these people for that reason. Though unfortunately we’ll find as the story develops, that their rebellious attitudes is what will lead these rules to broken, at certain points in this story.

To my knowledge of heist films/TV, there definitely seems to be more films than TV shows, and I believe this series to have been somewhat of a risk. But I think this one paid off because the show wasn’t just about the heist, it was all about the people. Much like how the heist was, the show is about making us care about the people, and even to a degree seeing the government as the enemy. In my opinion it’s that sense of rebelling against the government that made Joker so popular amongst older teens, and in all honesty, I felt like I knew these characters to the point where I felt I was rebelling against my government, and the financial inequalities, that this show deals with.

The show also helps us get to know the hostages throughout, with one or two being severely miss-treated by one of the bank robbers, one who sexually abuses one of the hostages, which I think helps to keep us on the fence throughout the first two “parts” (or seasons). We understand every character almost perfectly well as the show progresses, even the ones we had lost, through flashbacks, I will admit that makes me feel that their deaths have a little less impact, but it is definitely a clever way of developing a deceased character.

One of the things that initially disappointed me about the show though, was the lack of deaths in the first or second” parts”. Don’t get me wrong, I cared about all these characters (well almost all, I’m not the biggest fan of Rio), but to me, it’s deaths that help to raise the stakes, especially in a show where they are clearly breaking the law, which should have major consequences, and almost make us feel bad for wanting to side with the bank robbers. I guess they would hold of character deaths until much later, to allow for us to feel sad when these chosen characters died, giving us the opportunity to truly feel as upset as the characters feel.

I would strongly recommend giving this a watch if you have Netflix, because quite honestly I’ve not been that brave at trying out their Originals, but this show, alongside couple of others I’ve given a watch, is greatly enjoyable and, if you’re reading this whilst we’re all in quarantine, I think this might be a better time than any to binge it.