CLASSIC DOCTOR WHO ON BRITBOX – The Space Pirates 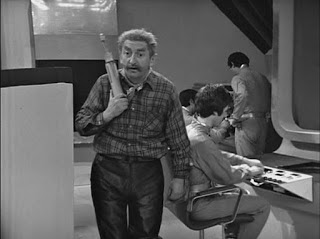 On 26th December 2019, 627 pieces of Classic Doctor Who content were made available to Britbox subscribers. Every Sunday in 2020, our Doctor Who expert, Tony Cross, looks back at some of the classic stories. Here is the Second Doctor adventure The Space Pirates...

Well, that was The Space Pirates that was.

It's far too long. It might be bearable at four episodes. At six it requires repetition and padding beyond the call of duty.

Then there are some of the performances. General Hermack (Jack May) and Major Warne (Donald Gee) appear to have decided that they're in Thunderbirds. They talk to each other in strangely not very human ways. My favourite moment being Hermack's mwahaha response to Milo Clancy (Gordon Gostelow). Jack May affects what Clive James calls the 'period laugh, which actors use when they're playing in period dramas. It's weird. Also, Hermack and Warne talk to each other in huge chunks of exposition. That happens a lot. In Part 2 The Doctor and Zoe do something similar. It is rather surprising for a writer like Robert Holmes. But everyone is allowed a bad day.

Oh. Then we have Milo Clancy (Gordon Gostelow). Milo is played like an old-time US prospector or at least the cliched version of one. He's a little like Walter Huston's Howard in The Treasure of the Sierra Madre. He's a recognizable character but his performance is so at odds with everyone else in The Space Pirates that it seems like a joke. I actually quite like it. It takes a bit of getting used to, but he is at least entertaining and by the final episode he's one of the best things in it.

Let me pause here a moment and make another admission. I'm not sure I have a lot to say about this story. I can't make a proper judgement with so much of it missing. How does one really judge Gostelow's performance without SEEING it? Hermack and Warne are irritating because you can only hear them, although when you see them in Part 2, they appear to be a little wooden. But that's one episode.

Normally, you'd be rescued at this point by a brilliant performance from Troughton but for once - with a couple of exceptional moments - this story makes it hard to judge. (I'm a particular fan of his 'O Zoe, don't be such a pessimist' and 'Jamie, I don't think you appreciate all the things I do for you.' lines.) So, I'm at a bit of a loss.

The really good thing here is Cavan (Dudley Foster). He's the villain of the piece. He's mad, bad and dangerous to know. He's possibly the most ruthless villain we've seen in the series so far. His treatment of Dom Issigri (Esmond Knight) has obviously been terrible. Then there's Caven's ugly, gloating cruelty when we're watching Clancy and Dom Issigri dying on the LIZ-79 whilst Issigri's daughter, Madeline (Lisa Daniely) looks on. It's a surprisingly dark moment in the series. It's unusual for a villain to be the best thing in a Doctor Who story but such is my lack of feelings about this one that I'm finding it hard to be positive.

People often comment on the fabulous space ships and they do look good but they also seems static, with a couple of exceptions and it is hard to visualise their scale but again this is another reason why it is a hard story to judge.

There's a lot of running about in caves. There's capture and escape. I'd love to see the escape from Dom Issigri's study, which is either going to be terrible or brilliant.

Truth is, I'm done. I can't recommend it, but I can't slate it too much either because I can't see it. This is the first missing story where I'm having a complete failure of imagination, which implies that I don't care too much about it.

It's not the worst Troughton story. I'm giving that accolade to The Dominators, which I dislike quite a lot. Indeed, The Dominators is vying with The Celestial Toymaker as the worst Doctor Who story of the 1960s. In comparison, The Space Pirates seems to commit one main crime: dullness.

But as I've already said this might be worth re-considering if - IF - it is ever rediscovered.