CLASSIC DOCTOR WHO ON BRITBOX – The War Games 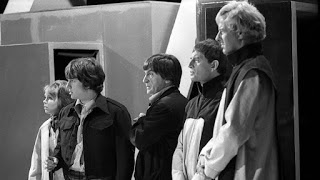 On 26th December 2019, 627 pieces of Classic Doctor Who content were made available to Britbox subscribers. Every Sunday in 2020, our Doctor Who expert, Tony Cross, looks back at some of the classic stories. Here is the Second Doctor adventure The War Games...

So, that is the end of the Patrick Troughton era of Doctor Who and it's a magnificent way to end it. The War Games is ten episodes long but hardly drags for a moment. Terrance Dicks and Malcolm Hulke, who shared the writing on this, find a way to inject a new boost just when you think things might be slacking.

The Doctor, Jamie, and Zoe arrive in what seems to be World War One but as things begin to roll along it becomes clear that something is not quite right. It turns out that they've landed on an alien world where an alien race - that never gets named - has swept up soldiers from various Earth conflicts and is having them fight on so that they can produce a galaxy-conquering army from the survivors. The whole thing is headed up by the nattily bearded War Chief (Edward Brayshaw) who has built a series almost TARDISes to help out. It turns out that the War Chief is another Time Lord (It is in this story that the Doctor's people get their name.) and that he knows the Doctor.

This is revealed in the lovely end to Part Four when the Doctor and the War Chief recognize each other. It's played superbly by both Troughton and Brayshaw. As are their later conversations. You can see why people think The War Chief is The Master before he gets better branding as their chats aren't dissimilar in tone. You can almost trace a line from The Monk to the War Chief to The Master as the Doctor's fellow Time Lords get increasingly menacing and mad. You can't see The Monk becoming The Master, but you can see The War Chief going down that route. Indeed, the War Chief's plan is pretty much a classic Master* plan: link up with the alien race to take over the galaxy with the long-term objective of seizing power yourself but ending up relying on the Doctor to bail you out. Although in this case, it looks like The War Chief actually dies but just because we don't see the regeneration doesn't mean it doesn't happen.

The War Chief reports to The War Lord (Philip Madoc) and is supposed to work alongside the Security Chief (James Bree) but they appear neither to like or trust each other. The War Chief is utterly contemptuous of the Security Chief's abilities. The Security Chief is, basically, a racist who doesn't trust The War Chief. James Bree's performance is...odd. He seems to be channelling a Dalek vocally but does have a level of creepy about him that suits the part. But for genuinely terrifying take a bow Philip Madoc. The War Lord is fantastic. He almost never raises his voice but has a dark presence that makes him feel like Darth Vader but without the need of all the costume to back him up. This is one of the great Doctor Who villain performances.

The aliens have 'processed' the human soldiers, but that process isn't perfect, and some have thrown off that conditioning and formed a resistance. The aliens tend to control their doubting troops using some glasses - or in the case of the World War One German Officer - a monocle. It's rather odd but it works. I'm a particular fan of Noel Coleman's General Smythe who is a genuinely horrid creation. He's not far off being a character from Oh! What A Lovely War in that his ruthlessness and coldness doesn't fit the cliched version of the World War One British Officer.

I should pause here and say that also worthy of applause are Jane Sherwin as Lady Jennifer Buckingham (who is a sort of Vera Brittain figure) and David Savile as Lt Carstairs. These are two characters from 1917 that the team up with the TARDIS crew from pretty much the first episode and in my head canon post-War Games they track each other down and live happily ever after, although in reality Lt Carstairs odds of surviving through to the end of the war weren't long. 17% of British Officers died during World War One v 12% of ordinary soldiers. But I'm going to ignore the voice that reminds me that Wilfred Owen was to die on 4th November 1918 and paint a picture of Lady Buckingham and Lt. Carstairs living a long and happy life together. Carstairs perhaps going into politics in the 1920s and becoming one of those Tory MPs that did so much to fight against Chamberlain's appeasement policy like Ronald Carter**

The final two episodes are simply majestic. The Doctor realizes that he's going to have to call on his people, the Time Lords, to sort this situation out. The way he, the War Chief and the War Lord talk about the Time Lords makes them out to be genuinely terrifying. I love the little mental box that the Doctor creates to send a message to the Time Lords. I love the strange sound that heralds their arrival. I love the Doctor's futile attempt to escape. Twice. The second of which I think he only goes through to please Jamie and Zoe. He knows that he's not going to escape. He always knew.

Is there are sadder companion departure in all of Doctor Who than the farewell of the Second Doctor with Jamie and Zoe? It's not just that he's forced to say goodbye it is that the Time Lords are going to wipe their memories of all but their first adventure with him. All those stories lost. Like tears in the rain. All that love and friendship gone.

And when we see Zoe, standing back on the Wheel looking a little confused, and she says - to Tanya Lernov (Clare Jenkins re-hired for that purpose) - "Oh, yes. I thought I'd forgotten something important, but it's nothing" your heart actually breaks. Is there a sadder companion departure than Zoe's in all of Doctor Who? Jamie's is sad too. After all the Second Doctor and Jamie have been together for virtually the whole of the Second Doctor's era. But his final moment seems more positive somehow, although more dangerous.

The Doctor has been tried by the Time Lords. He defends himself by showing the kind of monsters he's been fighting - although why he thinks the Quarks will impress anyone I don't know - and the Time Lords agree. Or they do to a degree. He is to be sentenced to exile on Earth. And his appearance is to be changed.

Troughton who is magnificent to the end refuses to go quietly but go he must.

The Troughton era is over but it has been such a delight. It's not that a lot of the stories are that strong. There's a lot of repetition of the base under siege plot line but at no point is Patrick Troughton ever less than magnificent. He lifts the weakest material. He can drop his voice and hit you with something terrifying. He rarely shouts. I love Tom Baker. I think Peter Capaldi is amazing. But I think Troughton is the best actor to play the part. I'll miss the mop-haired little Hobbit.

But if you haven't watched The War Games go and watch it.

Actually, watch anything with the Second Doctor in it because you will find the world a better place for it.

*Apologies for the pun. Not really.

**I recommend Lynne Olsen's book Troublesome Young Men if you're interested in that topic.