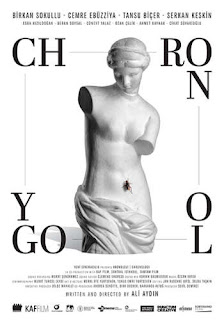 Tony Cross took the time to watch Chronology (Kronoloji) thanks to Fortissimo Films...

Chronology is a Turkish thriller written and directed by Ali Aydin. It tells the story of Hakan (Birkan Sokullu) whose wife Nehal (Cemre Ebuzziya) disappears. The last time Hakan saw her she was entering the flat of an older man. A man Hakan did not know. Then she disappeared.

This is a film that burns slowly, centred on superb performances by the main cast. From the moment we see Nehal on her own at the hospital and then we discover that she and Hakan have been trying unsuccessfully to have children, but it seems that they are doomed never to have any.

It is a hard film to review in one key respect. There are twists that you do not want to be tipped off about in advance, after which you start to question everything. Aydin plays with time and with our expectations. It is mostly handled in a subtle way, although towards the end some of the dialogue is a little too on the nose. The last line though is a doozy.

There are so many excellent performances. Birkan Sokullu is a solid central character but I think Cemre Ebuzziya as Nehal is breathtakingly good. The performances are not showy. There are no histrionics. It weirdly feels like one of those British films of the 1930s and 1940s when characters are all calm on the surface, but the emotion is happening underneath, which makes it even more powerful. There are moments when things bubble to the surface, but not often.

I should also mention Serkan Keskin who plays the Police Officer Ayhan who is drawn into events after Hakan attacks Cengiz at his flat. But there is not a dud performance in the whole thing, even in the smaller parts.

And even though it started of slowly I found myself drawn into events, changing my opinions on characters as things moved on and trying to guess where things were going to finish up, which is all good.

It might have benefited from a slightly shorter running time, but Aydin gives his characters and actors room to breathe, which I always enjoy. But Hakan and Nehal are also an illustration of society and a woman’s place in it. In that respect it reminded me a little of Deniz Gamze Ergüven’s Mustang (2015), but I might be just picking an obvious Turkish example. There’s also something of the Christopher Nolan about it.

This is Aydin’s second feature film as a director, the first being Küf, which I haven’t seen but there is enough interesting things going on here to make me want to try and see that too.