Film - The Films That Made Me: Donnie Darko 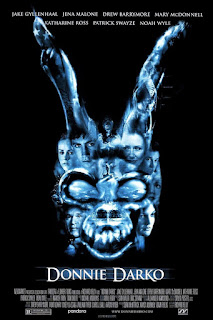 Ren Zelen looks back at some of the films that made her fall in love with cinema in the first place with The Films That Made Me. This time she looks back at Donnie Darko (2001)...

Donnie Darko has been firmly entrenched in my favourite top ten films since it first hit cinema screens in 2001. I re-watch it every year or two, and it never fails to engage.

If you’re expecting me to explain the movie, I’m afraid that I’m just as unlikely to do so as writer/director Richard Kelly or actor Jake Gyllenhaal. Besides, you know you don’t really want me to, because if I did explain what every twist in the film means and how it all fits together, the movie wouldn’t intrigue you half as much. No-one really wants to see inside the workings of a cuckoo clock, they just want to see the strange little bird pop out.

I will mention that Richard Kelly used the setting of a kind of 1980s ‘John Hughes’ mainstream film and then subverted it in order to destabilize our expectations and make us participate in the process - make us use our imagination and intellect to work things out, if we can. Rather gratifyingly, decades later, we’re still trying to do so. Its ambiguity is part of the reason for the movie’s success as a popular, cult artefact.

If you insist on some kind of explanation, it seems pretty clear that Donnie Darko is intended to be seen as a fable - the story of a teenage boy who receives communiqués about the future from a huge, demonic-looking rabbit. He has visions of liquid conduits flowing out of people’s chests and he can see time-portals which impinge on and alter, reality.

Interestingly Donnie, the central character, is also at a time in his life when he is beginning to look at the world around him – one which seems comfortable, benevolent and familiar - and starts to see below the surface. He comes to realise that much of what he observes is not quite the ideal he might once have imagined. The people around him, even those closest to him, are flawed, and there are other, more sinister ambiguities, deceptions and dangers that may be hidden from view.

Like many American teenagers, he has been told that the American way is one of free-speech and free-expression, but his reality shows otherwise. Many young people come to realise a contradiction between what they are told and what they actually experience, and perhaps Donnie Darko struck such a chord in the public consciousness because we all came to recognise something in Donnie’s inner struggle.

We are told that self-expression is to be nurtured and supported, but we too often find that we are actually expected to be passive and to conform – not to challenge our leaders, not to inquire too much into what really affects our lives. We are encouraged to view the lives of celebrities as a distraction from delving too deeply into the actions of those who really exert power over us.

Richard Kelly clearly had the knack of creating a uncanny and ominous atmosphere out of the materials of everyday life. To make this kind of fantasy work it must be grounded in a realistic setting, or it will collapse under the weight of its own weirdness, (as so many of the ‘wannabe’ imitators have found to their downfall). 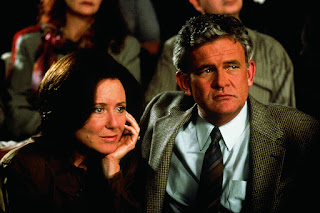 Donnie, (unusually for a teen in movies) comes from a happy home. His mother Rose (Mary McDonnell) is sensible and loving in the face of distress, his father Eddie (Holmes Osborne) is cheerful and imperturbably even-tempered. When called in for a conference with the principal regarding Donnie’s ‘misbehaviour’, his parents show their intelligence and tolerance by being amused rather than shocked. In choosing to cast Gyllenhaal’s real-life sister Maggie, Kelly succeeded in establishing a believable family dynamic – liberal, bickering, funny, supportive, but with human flaws.

The realistic and vaguely absurd tone of the film is set during the first dinnertable scene where the Darko family sit down and begin to discuss politics. It looks as if the parents have fostered a liberal atmosphere in their household. However, this is not quite what it seems to be, as they appear more shocked by the idea of voting for Michael Dukakis than by any amount of vulgarities being used in front of their nine-year-old daughter Samantha (Daveigh Chase).

This creates an interesting dichotomy where mixed-messages are being sent to their children and to the audience – we have a liberal family environment which seems relaxed about language and sexuality, but is also politically conservative – two things which traditionally, don’t really belong together.

In Gretchen (Jena Malone) the new girl in school, Donnie also finds a kind but troubled girlfriend who becomes a catalyst for some of the events during the course of the movie. He has allies in his science teacher, Dr. Kenneth Monnitoff (Noah Wyle) and English teacher Karen Pomeroy (Drew Barrymore).

Nevertheless, disturbing undercurrents are gathering. Donnie is seeing Dr. Lilian Thurman (Katharine Ross), a psychiatrist who uses hypnosis and discovers that Donnie has a scary nocturnal rabbit-guide-hallucination called ‘Frank’ (James Duval). Frank has informed Donnie that the end of the world is near and is now goading him into a sequence of dubious sleepwalking excursions.

Far from being the conventional example of a detached professional, Dr. Thurman grows increasingly concerned regarding Donnie’s inner turmoil. Donnie’s sessions with her build to one of the most emotional scenes in the film, which sees her desperately trying to grapple with the terror that has overtaken her patient. (Ross plays the scene with admirable restraint, making the encounter all the more poignant).

The set-up, the characters and the story development of Donnie Darko are nothing less than fascinating. We have bizarre occurrences and surprising or disturbing twists, but soon the seemingly unrelated events and characters begin to link together, building to an unexpected and original climax. The denouement, however, remains forever ambiguous and enigmatic.

There isn’t much point going into the intricacies of the time-travel idea here, as a myriad of explanations and theories by fans of the film can easily be found. Suffice to say that the mysterious jet engine, that no airline will admit to owning, works wonderfully well as the linchpin of this story, and to save the ‘primary’ timeline the jet engine must again be transferred back in time to the 2nd of October, 1988. 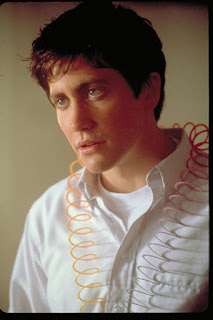 In casting the young Jake Gyllenhaal in the role of Donnie, Kelly found an actor able to suggest a character who is disturbed, but never frightening. Gyllenhaal’s Donnie is instead perceptive, curious, eccentric, sardonic, sometimes lost or vengeful, yet he always remains sympathetic and compelling. Though Donnie is heroic enough to make a Christ-like sacrifice when the "end of the world" comes, it's possible that he never had a choice, only the intelligence and insight to sense the eerie time-warp pattern that was culminating and in which he had to play his part.

Kelly’s characters, good or bad, including the supporting ones, are well developed individuals - they’re fresh and interesting. They all have their place in the story and Kelly never gives way to the temptation to reduce any of them to a stereotype. A great deal of the movie’s appeal comes from the fact that we engage with all of the characters to a certain extent, and we respond to them – with curiosity, with repulsion, with amusement, or with empathy.

Imitations and sequels have fallen by the wayside because of the simple fact that Donnie Darko is a one-off - a unique moment when the planets aligned for Richard Kelly - when time, era, words, images and music (an effective score by first-time composer Michael Andrews) came out right, and his odd little bag of ideas twitched into life. The act of successful creation can be a disconcertingly arbitrary event.

It’s not easy thing to re-create either, as Kelly has since found. Donnie Darko was his first feature out of film school and was nominated for 21 awards, winning 11 of them. The film later ended up as number 2 on Empire magazine's list of 50 greatest independent films of all time.

The timing of the film’s release, although coincidental, was perhaps also a factor, coming so close as it did to the tragedy of 9/11 – an event which shook the very foundations of America’s sense of security and seemed to come out of nowhere, as unforeseen as…a plane engine falling out of the sky.

Donnie Darko has an internal logic of its own (at least in my mind) and I could tell you what I think the ending means and what the movie is about, but my interpretation would be no more definitive than your own, that is part of its charm. However, I challenge you to name a more original, more absorbing, more infuriating, more endearing, more poignant, more genre-bending or more evergreen, tragi-comic-coming-of-age-time-warp-sci-fi-riddle-giant-rabbit-horror-drama, than Donnie Darko. May its dark ambiguities continue to encourage us to ponder its mysteries.