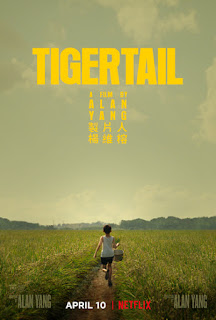 Now available to stream on Netflix, watch the trailer for Tigertail, written and directed by Alan Yang...


"Eventually, your life together is what you'll have in common"

In this poignant multi-generational drama, Pin-Jui (Hong-Chi Lee) is a free-spirited yet impoverished young Taiwanese factory worker, who makes the difficult decision to leave his homeland - and the woman he loves - behind in order to seek better opportunities in America. But years of monotonous work and an arranged marriage devoid of love or compassion leave an older Pin-Jui (Tzi Ma) a shadow of his former self. Unable to sympathize with his daughter Angela (Christine Ko) and at risk of living out his retirement in solitude, Pin-Jui must reconnect with his past in order to finally build the life he once dreamed of having.