Short Film - A Better You 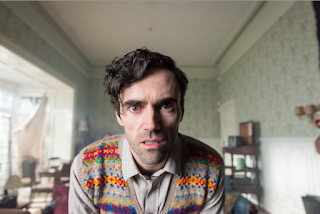 With the short film due to have been shown at Tribeca Film Festival, now postponed, Susan Omand watched Eamonn Murphy’s A Better You...

In a dystopian neo-steampunk world, a shy young man named Douglas invests in “A Better You” a customizable carbon clone to help him win the girls of his dreams.

Dystopian neo-steampunk? Count me in! And it is a very good film. It would have been perfect but for one annoying thing which I’ll talk about later on because it involves a spoiler. So be warned!

Firstly though, I’ll talk about the good bits. I loved the concept of the film, that you can buy and customise, by way of setting various percentages of personality traits, a clone of yourself. Then you just flick the black switch at the back of its neck and watch as it does all the difficult social stuff for you, like talking to people, being charming, winning them over etc etc. Just imagine never having to make water-cooler small-talk again, or never having to deal with nerves at a conference presentation, or being able to actually speak out loud and be witty and interesting in any situation where you're not the only one there! You can tell I want one of these things, can’t you?

Because of that, I really empathised with the cringing awkwardness so beautifully portrayed by Seán T. Ó’Meallaigh as Douglas. Painfully shy, he manages to ask Olga, the mousy mail girl from his office (perfectly pitched by Hannah Mamalis), out to a dance that he got tickets to, but he only manages this because he could message her through a computer system and not have to ask her face to face so rejection wouldn’t be so painful. When she does actually accept, he starts to panic and buys the Better You clone to go on the date for him. The fact that Ó’Meallaigh also played the Better You Douglas clone, meant that his interactions with himself had to be really cleverly filmed to be believable and it was surprisingly good, considering the budget that a short film normally gets. I was also mightily impressed by the understated-ness of the Steampunk aspect. It was definitely there, but not in the usual overt “Edwardian cogs and goggles” kind of way, it was a lot more subtle than that, with dark greens, period furniture, valve driven screens, typewriter keys and copper highlights, all of which gave a wonderful art deco feel to the environment. As I said at the start, it was an almost perfect film. Almost.

OK, spoiler alert. I’m going to speak about the ending so skip over the next paragraph if you don’t want to know.

Still here? OK, minor rant incoming. Boy, oh boy, did the writer miss a HUGE opportunity at the end of this film!! With Douglas’ clone having powered down, due to him not charging the battery properly, he ends up going on the date himself, to meet Olga at the bandstand. You can tell that he’s nervous and running late, having nearly cancelled it by e-message, but she’s there waiting for him, in a lovely simple dress, with her hair pinned up, and their meeting is very sweet and gentle, not awkward at all as they walk off into the night together to go to the dance. Very schmaltzy, sickly sweet and far too predictable. WHY OH WHY OH WHY did we not then see a clone on/off switch on the back of Olga’s bared neck as they walked away?! It would have added so much depth to her character and given an “oooh” moment to the implied future dynamic of their relationship without the need for any extra dialogue or any more explanation, because we already know of the clone backstory from Douglas. Then, yes, THEN, it would have been the perfect film!!

Anyway, no more spoilers. A very enjoyable, very well acted, short that used a fascinating concept in a beautiful world that I would love to explore further. If you do get the chance to see it in future, I highly recommend it.