CLASSIC DOCTOR WHO ON BRITBOX – Terror of the Autons 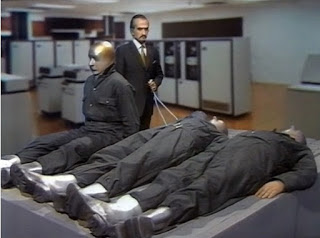 On 26th December 2019, 627 pieces of Classic Doctor Who content were made available to Britbox subscribers. Every Sunday in 2020, our Doctor Who expert, Tony Cross, looks back at some of the classic stories. Here is the Third Doctor adventure Terror of the Autons...

Terror of the Autons is the first story of Pertwee's second season. Notable for the first appearances of Jo Grant and The Master as well as being the second outing for the plastic fantastic Autons or should we call them Nestenes?

The first thing you notice is that it zips by perhaps because it is the first four part story in yonks.

It does recycle some ideas from Spearhead from Space, for example instead of weak-willed plastics factory owner Hibbert being under the mental dominance of the Auton Channing, we've got weak-willed Rex Farrel under the mental dominance of the Master. Both men are confronted by colleagues wondering what the hell is going on and both these colleagues are killed as a result.

In fact you might argue that both stories' main role is to introduce us to a new Time Lord. In the case of Spearhead from Space it's the Doctor and in Terror of the Autons it is The Master.

I have to confess that Roger Delgado is my favourite incarnation of The Master. He's charming, dangerous and intelligent without ever going too OTT. He underplays what could have been quite a hammy role deliciously. Other actors who have played the part often over-egg the part a little and forget that it makes The Master a bit cheesy and therefore less threatening. Delgado's Master is definitely most terrifying because he is so cold, calm and surface civilised.

The confrontation between The Doctor and The Master in the UNIT Laboratory is excellent. There's a real sense of two old adversaries meeting up again for the first time in some time. There's an edge despite the politeness.

[Digression Alert: Can I just say that the Brigadier should sack whoever it is that makes UNIT's passes because the bad guys seem to find it shockingly easy to knock up believable copies so they can swan about in the HQ to their hearts content]

As for the other new character Jo Grant, I think we'll need to see how she beds in over time. Katy Manning is very...enthusiastic. If anything reminds me of how Bonnie Langford will later play Mel Bush: all blundering high spirits & a little too much 'oomph'.

But Jo's likable enough and certainly makes a more sensible partner for the Third Doctor than poor over-qualified Liz Shaw. A point the script itself makes when the Brigadier dismisses the Doctor's demands for a properly qualified assistant by saying: "Nonsense; what you need, as Ms Shaw herself so often remarked, is someone to pass you your test tubes and tell you how brilliant you are. Miss Grant will fulfil that function admirably."

The usual UNIT weirdness is going on. Sometimes UNIT looks like a huge multinational military organisation and sometimes it doesn't. This difference is sometimes noticeable in the same story. So whilst the fire-fight between UNIT and the Autons at the end looks quite impressive the fact that the Brigadier choice of official vehicle - a small blue Austen - is remarkably cheap and non-military.

I'm going to write a separate article on UNIT at some point but poor old UNIT privates seem to die in quite large numbers in this episode and it does make you wonder how they explained the casualty rate to both their superiors and to their soldiers families.

Anyway it's quite fun but not a great story. In fact, I found it a tad disappointing after the great Season 7.