CLASSIC DOCTOR WHO ON BRITBOX – The Mind of Evil 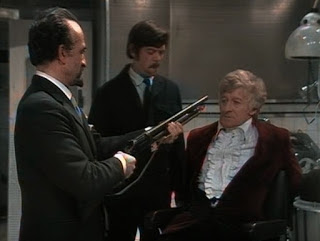 On 26th December 2019, 627 pieces of Classic Doctor Who content were made available to Britbox subscribers. Every Sunday in 2020, our Doctor Who expert, Tony Cross, looks back at some of the classic stories. Here is the Third Doctor adventure The Mind of Evil...

I enjoyed that a little more than Terror of the Autons.

UNIT get to look like a proper military outfit, the Brigadier talks & sounds like a soldier who knows what he's doing & both Sergeant Benton & Captain Yates get properly involved. There's some nice comedic stuff between the Brigadier & Benton towards the end of the story when the Sergeant finds himself appointed 'Acting Governor' of the Prison.

The Master has an over-complicated plan as usual & as usual seems to need the Doctor to bail him out before it all goes horribly wrong. You can kind of see why The Master rushes through his regenerations if this is the kind of plan he regularly puts together.

However there are - again - some nice scenes between The Master & The Doctor. The concern The Master shows for The Doctor after the latter has had his second run in with the Keller Machine makes you wonder how serious The Master's threats to kill the Doctor actually are. It's like they're playing some Time Lord game with the Earth. (Or playing at being God & the Devil having their bet over Job).

[Must stop taking these things so seriously]

I haven't said much about Jon Pertwee's performance as The Doctor yet. The one advantage to watching Doctor Who in broadcast order is I have got a feel for the rhythm of programme making & performances in a way that I haven't when dipping in & out of stories.

The Third Doctor does have a tendency to be a little patronizing. He's also seriously ungrateful to the Brigadier on several occasions & clearly his mind is on getting the TARDIS sorted out so he can go off gallivanting around the Universe again. Pertwee plays all that well. Yes he's got a few trademark gestures: neck rubbing etc that are short-cuts to showing us what's going on in the Doctor's head but what I have been impressed with is Pertwee's ability to play the serious stuff dead straight.

I'll probably have more to say as I carry on through the era.

A couple of other things I noticed. There's another silent black actor, playing The Master's chauffeur to follow Roy Stewart’s appearance in Terror of the Autons [His second appearance as the strong, silent type after playing Toberman in Tomb of the Cybermen] & one of the technicians in 'Inferno'. I think watching 'Race Against Time' the excellent documentary about non-white actors in Doctor Who (& British television in general) on 'The Mutants' DVD release has made me pay closer attention to these parts. The fact that Chin Lee is played by Chinese actress Pik-Sen Lim made me wonder why six years or so later they couldn't find a male Chinese actor to play Li H'Sen Chang in 'The Talons of Weng-Chiang'. But I digress.

The Mind of Evil is pretty good in the end. There's hardly a duff performance from any of the guest stars but William Marlowe's Mailer should be singled out for special praise for being a nicely underplayed thug.