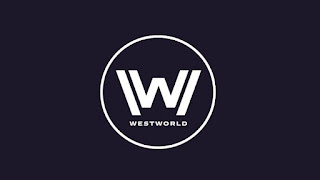 With Season 3 currently showing on Sky Atlantic, Marc Nash finally saddled up to watch the first two seasons of  Westworld...


I’m not a fan of reboots. I can’t see how a few marginal gains from the original, can possibly outweigh the core ideas that made the original so good in the first place. And if the original wasn’t much cop, why bother rebooting it at all? Since the original 1973 movie “Westworld” was a work of genius, I’d swerved the TV reboot for three years. But, like everyone, as I’m under house arrest with plenty of time to fill, plus a good-looking trailer for Series 3, I finally succumbed and cross my fingers and prayed this wasn’t going to desecrate my memory of the film. But rather than dive into the current series, I felt I needed to start at the beginning with Series 1.

There are three categories of character, guests at the theme park; hosts which are the machines; and the staff running the park, from executives through security to the techs who repair the machines after they’ve been shot or beaten. All have their own agendas and most of those are rogue. We only follow 3 guests, two of which are there doing some corporate team building, the third, played by veteran park player Ed Harris (looking increasingly like “Red Dwarf’s” Kryten), has gone totally off script as he seeks the truth supposedly buried in a metaphorical maze within the park. Because there are only these three guests, most of the action revolves around the hosts. Therefore there are many host on host shootouts, which have no jeopardy since they will be up and running the next day. Some of the hosts are experiencing aberrant flashes of memory, but since it makes no sense to them, neither does it make sense to us sat watching on the couch and, unlike them, we have no particular stakes in getting to the bottom of it. The park workers are all up to no good, whether it be having sex after hours in the repair centre, or tinkering with the coding as at least two of the executives seem to be wanting to recreate real people in their lives who have died in the form of hosts. Something the series “Humans” explored much more effectively.

With this recipe, nothing much happens for 6 episodes, as the suspenseful elements are floated into a vacuum with no payoff for an interminable age. Finally we get a twist and a reveal in 7, a couple of lines about the nature of consciousness that isn’t hackneyed in 8 (by park inventor Anthony Hopkins who does a nice line in the dulcet menace of an apocalyptic misanthrope). Episode 9 ratchets up the bodycount as finally there is some real jeopardy between humans and hosts and 10 has the most preposterous climax for Thandie Newton’s host character Maeve. The original film had proper tension and flow, this has neither. Also the scale of the park is so massive (a train journey through it is overnight, which raises the problem of how the dead hosts are physically recovered to the repair lab in time for reappearing next day), so everything feels too stretched out to hold any tension, whereas the film felt really claustrophobic despite the seeming open plains backgrounding the town setting. 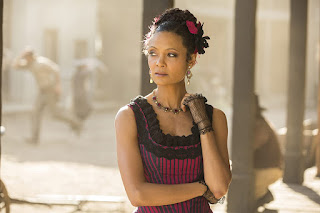 And then we have the plot’s logic flaws. Ed Harris cuts the throat of a host compadre, hangs him from a tree to drain his blood into a water bag and then takes this host blood and transfuses it into a new wounded host to bring him back from the brink of death so he can serve as his new sidekick. It’s not real blood, or if it is, it shouldn’t function as life-giving force in a host, let alone the absurdity of just how Harris’s character carries out a transfusion in the middle of the wilderness. Thandie Newton’s Brothel Madam has been programmed with the maximum machine intelligence of 14 because she is ‘management level’ seeing as she runs a business. She is one of several rebellious hosts, plagued by these fleeting memories, who uses it to explore her own being. She manages to intimidate a couple of repair techs and demands that they increase her intelligence rating. They respond that she will have to go offline and she agrees. There’s me shouting from the sofa that once they go in, just turn her intelligence down to zero and her insurgency is stopped in its tracks. But no, they behave as requested and lo and behold, two episodes later when Maeve makes more recoding demands, they hit upon my scheme, but by then super-intelligent Maeve is ahead of them and builds in protections to foil the dastardly human duo. And like I say, her climax suggests she isn’t all that super-intelligent after all, flying in the face of the entire journey she’s taken up to that point to escape the park and enter the world of humanity. Finally, when humans make reference to things like cars, or talk directly to the hosts about this being a game, the hosts don’t bat an eyelid and seem to know exactly what they’re talking about, which makes no sense at all.

There are a few musings on the nature of time, reality, memory and consciousness, but the constant jumping about in time and narrative lines makes it almost impossible to follow. Of course hosts are shot and yet return right as rain the next day without any memory of the previous day, so sometime they are locked in groundhog day of their storylines, at other times their fleeting memories drag them into a different reality and within a moment they’re back in the room (or in this case the saloon), it’s really very confusing to try and work out what’s going on. It just doesn’t work intellectually or from an entertainment point of view, because nothing happens for too long, we the audience don’t really know what’s happening and there is no tension to drag us through because everything is so fragmented.

Because I am your intrepid and faithful correspondent, I decided to commit another 10.5 hours viewing time to Series 2, hoping that with the universe of Westworld now established, the plot would settle down into some comprehensibility. It doesn’t. It probes and expands and stretches the character motives and storylines of Series 1 until breaking point and break they do. All the hosts have gone off message as they override their coding and their guns now fire real bullets. Since two of the three guests have retreated to confrontations and interrogations in R&D labs, even more of the park action takes place between the hosts and the bodycount is obscene, but of course no one who really matters catches a bullet. Still no jeopardy. Delores and Maeve, the two hosts with the most don’t even appear in episode 4, despite episode 3 leaving us with new cliffhanger impetus for their respective missions. In episode 5 we get introduced to Eastworld, a realm of shoguns, ninjas and ronins, just to try and spice up the unfathomable storylines that have run pretty much dry in Westworld. The recourse of the bankrupt scriptwriters, introduce a completely new element. You don’t believe me? In episode 4 they introduced another Eastworld, a version of The British Raj, solely in order to inject Ed Harris’ daughter into the plot. In episode 8 we finally get the back story of the Ghost Nation tribe, whose appearances previously never seemed to follow any logic, but that whole episode feels like a time out anyway. Again, creative bankruptcy. Every episode has a new, secret lab bunker, ensuring that some character or other will utter the tedious line “I want to show you something”. The last couple of episodes ratchets up the bodycount and a lot of the star credited actors are killed with a sense of cleaning house that the whole show has just become too unwieldy; how many will return for Series 3? None I hope, or it renders Series 2 absolute gibberish. The twists and turns of each character’s storyline would make Inception read like Scooby Doo, but the problem is these twists don’t engage us in the realm of ideas, only in trying to keep up with the plot. While for rapidly moving storylines and fast changing realities, the characters sure follow meandering paths. Which characters are we supposed to follow or root for?

Yes this reboot was a desecration of the original movie. Bastards.