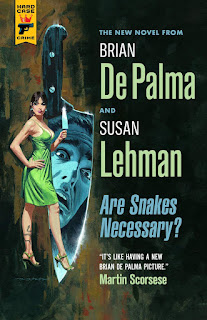 New from Hard Case Crime in the past few weeks has come an intriguing novel from Susan Lehman and filmmaker extraordinaire Brian De Palma [director of Carrie, Scarface, Bonfire of the Vanities, Mission Impossible etc etc etc - Ed] which has multiple threads all seemingly going nowhere then quite cleverly all meeting in one gigantic climax and I for one was sold before I even started reading. One of the most criminal things about the state of modern cinema is that De Palma doesn’t get the same respect or funding that other filmmakers from his generation still get, meaning what you sometimes receive from De Palma is not what was intended. However, words on a page aren’t as budget conscious as a film studio executive and De Palma is still a masterful storyteller and Are Snakes Necessary? is a welcome edition to any fan's collection.

When the beautiful young videographer offered to join his campaign, Senator Lee Rogers should’ve known better. But saying no would have taken a stronger man than Rogers, with his ailing wife and his robust libido. Enter Barton Brock, the senator’s fixer. He’s already gotten rid of one troublesome young woman—how hard could this new one turn out to be?

Pursued from Washington D.C. to the streets of Paris, 18-year-old Fanny Cours knows her reputation and budding career are on the line. But what she doesn’t realize is that her life might be as well...

Whilst written within the Hard Case Crime kind of style, that 50’s – 70’s pulp detective novel, it is very much a modern story with iPhones, and vlogging, but it's also a timeless tale with its heart in the past books of the publisher. It's witty, it's tense, it's extraordinarily clever, and yet reads in short, snappy sentences, letting your imagination fill in any blanks. It's more of a film treatment or script overview than a traditional novel but having words on a page play out a De Palma cinematic gem in your minds eye is no bad thing. Some may not take to the succinct style and that’s fine, each to their own, but if you read Are Snakes Necessary? from cover to cover I guarantee your life will feel the richer for it.