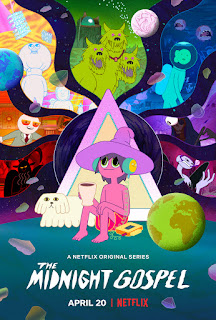 The Midnight Gospel is the story of Clancy, a spacecaster with a malfunctioning multiverse simulator who leaves the comfort of his extra-dimensional home on the Chromatic Ribbon to interview beings living in other worlds.