Short Film - I Am Pilate 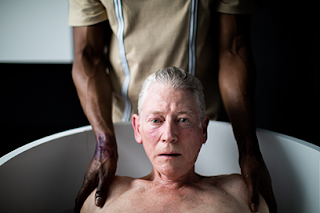 Daniel White watched the short film I Am Pilate, out now from Four8 Productions...

"A journalist is sent to the home of former district governor, but his routine obituary fact check reveals an extraordinary secret."

'I Am Pilate' is Independent Film Studio, Four8 Productions' latest short film in a series which intends to bring a new and modern twist to well known characters from The Bible. Sounded interesting I thought, although not an especially new concept and there have been many modern looks at historical characters and stories with equally varying degrees of success. For example, I have a slight issue with directors who attempt to stamp their own name on Shakespeare productions when all they do is turn out their cast in fancy looking Armani suits. Do something different! and yet sometimes it really works (the David Tennant and Patrick Stewart starring Hamlet was absolutely amazing.)

'I Am Pilate' runs at just under 10 minutes so I wasn't expecting much time to be spent on expensive scenery and the like but I was also interested in getting inside the head of the Roman Governor who put an innocent man to death. Whether Pilate believed Jesus was actually who he claimed to be remains to be seen, but he certainly had a challenging job what with Jerusalem being an occupied Capital and the Jewish nation being rather keen to shrug off their unpleasant Roman Oppressors. So, would Four8 Productions deliver on their stated revelation and could they shine new light on a character that seems to be pretty straight forward?

No is the answer and what's more I finished the film thoroughly confused as to what the extraordinary secret actually was. Worse than this, I don't really know what they were trying to achieve with this film. If the purpose of it was to provide some sort of evangelistic Christian challenge that makes people want to re-look at the claims of Jesus it doesn't work. If, on the other hand it's a secularisation of the Christian story that is supposed to give you additional insight into the mind of Pilate, that also fails. The problem is that Pilate pretty much is exactly what you think he is. A career driven opportunist who only really wants to make life easy for himself until he gets promoted to his next position. He shows no remorse for sentencing Jesus to death and only gives into the crowd baying for his blood to shut them up and avoid a nasty scene. There is no hidden depth, no ulterior motive but the film could have made so much more of what we do know. Why, for example, is there no mention of Pilate's wife and her dreams that Jesus needed to be avoided? No mention of Barabbus, the murderer, who is released instead of Jesus. 'I Am Pilate' is a short film that seems to think it will retain its audience interest by shifting the interview to a modern setting; Journalist sits in front of a retired Pilate with a tablet and is hosted in a swanky spacious modern one floor house. Neither is it particularly clever to allude to Pilate's famous speech about "washing his hands of this man's blood" by stating he needs to wash his hands a lot each day.

Further confusion is caused at the odd decision to change the name of Jesus to Mr Newman?? As a result, the flash back sequence pulls all its punches as the audience spend most of the time trying to work out if Mr Newman is supposed to be Jesus. I am sure that the production team knows the point they are trying to get across but as a committed Christian I struggled to connect with this on any level. The production quality is reasonable enough and the acting does not detract from the film but it is a short film which does not justify its running time or even the time spent watching it. I have a film maker friend who said that he didn't object if people liked or hated his film but what he didnt want to create is a film that is neither. I am sad to say that, for me, 'I Am Pilate' is in that category and if I had to explain what is was about I would struggle to say much more than exit interview for Pilate but as if it was conducted by someone on work experience. It may be that Four 8 Films previous film, focusing on Joseph and his showey offey coat, provides more material but I am a little scared of watching it. I find the story of Joseph challenging and inspiring and I really don't want it messed around with. [If you do want to watch it, you can find it HERE - Ed.]

'I Am Pilate' would have been far better if it had shown Pilate broken by his decision to execute Jesus (sorry, but I can't bring myself to call him Mr Newman anymore) and this would have enabled work experience journalist to at least tease out something for audiences to connect with. Watch if you wish but this does not deliver on it's stated promise. If I was going to be particularly cynical, with the release of this in Easter week, I could suggest that the production company were attempting to cash in on the Easter market. Definitely a could do a lot better; Disappointed!

The trailer for I Am Pilate is below and you can find the full short film HERE.