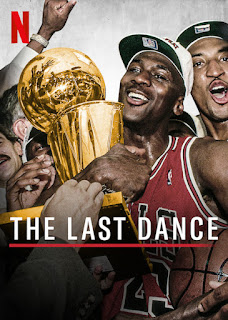 Marc Nash took the (Chicago) bull by the horns and watched The Last Dance documentary series, currently on Netflix ...

Word on the lockdown equivalent of the street [the vestibule? - Ed], is that everyone’s loving this documentary series whether they like sport or not. Don’t worry, you don’t even have to be into basketball to get swept up in the human drama of it all. That’s if you accept Michael Jordan was human. I’m not particularly into basketball, but I am a big (team) sports fan. And as a fan, I don’t really care about the private lives of those who play for my team, or what their political preferences are, just as long as they play their heart out on the pitch/field/court/oche. But, since I have no stake in, nor knowledge of the domination of NBA basketball in the 1990s of the Chicago Bulls led by Michael Jordan, I thought I’d give it a watch.

The most impressive thing was how Jordan steeled his mind and body from high school, through college, to joining the ranks of the professionals. He learned what it takes to win, to be the best and that is as much about training your mind to not lose focus and to not think about failure at all times, as it is the game skills and the physical development. Mind you, it needs the right genes to be tall enough to play basketball, possibly more restrictive than any other sport on earth in this respect. Jordan is a fantastic advertisement of the human spirit being able to overcome whatever disadvantages life throws a you, particularly in your upbringing, through sheer force of will. Friedrich Nietzsche probably would have approved of this superman with number 23 on his shirt. By contrast, Scottie Pippin, the second best player in the NBA and Jordan’s team mate throughout their golden period, made one poor but entirely understandable decision when he signed his Bulls’ contract, that periodically undermined his application and focus; because of the dire economic circumstances in which his family grew up in, he went for a long-term but modestly remunerated deal (by the standards of the league, he was the 116th best paid player), because he wanted to ensure his family would be taken care of even if he missed periods out injured when, players nearing the end of contracts normally risked being let go by their teams. Negative thinking see, speculating on future injury, something Jordan never would have done. Pippen’s Bulls’ career was pockmarked with rebellions against the suits who wouldn’t budge on his money. 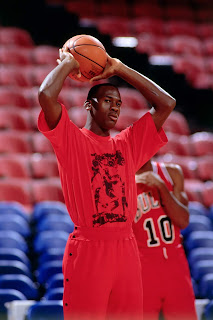 You can’t deny Jordan’s prowess as the best player throughout the whole league and his mental toughness to play through the murder of his father, an inquiry into his gambling and a bout of food poisoning, probably brought about by their opposition. And normally, I am drawn to such will-to-win at all cost sportsmen. I was always a big fan of Roy Keane, even though I didn’t support any of the teams he played for. But such monomaniacs do not make for terribly nice people. They bark at their team mates, they bully the rookies, because sport is war by other means and you want to be sure of the guys in the trenches with you. I expect every single changing (locker) room in the world is just the same. Jordan had the greatest will to win, so he expected his fellow players to match up to his appetite. But, as his career wore on, the stratagems Jordan used to get himself up for certain big game challenges, are less those of going into battle with your comrades and more hose of a street hoodlum’s feeling slighted and disrespected and seeking retribution. Just to stress, Jordan was not a kid from the street saved by basketball, his parents and brothers were hugely supportive to him. So with the wonderful access all areas of this documentary, we get a parade of opponents, who refused to show Jordan due deference because otherwise they were beaten before they set foot on the court and Jordan’s mental black book of scores to settle was brought into play time and again. They may have dared come out on top in a one-off match, but Jordan would ratchet himself up to target them and win out over them in any series. Now all long-retired, these opponents speak honestly and openly of their struggles with Jordan on the court, their approach to trying to best him and then appreciation that superman would ultimately defeat them. They are honourable, well-spoken men, whereas each time Jordan is shown a copy of their interview for the doc, he snorts derisively and shows them no respect and himself to have little class. I ask myself just why any professional sportsman needs to keep generating these type of mental goads to get them pumped for a game. Isn’t that their job? 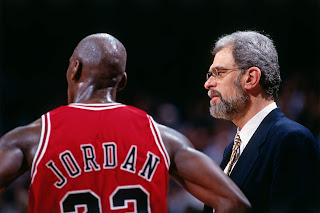 Jordan puts himself over as principled, the show’s framework is that after 5 championship victories, the suits are breaking the band up after the season of pursuit of the 6th and Jordan states from the outset, if manager Phil Jackson is not going to be retained beyond this season, he himself would retire from the game. Hence this season is “The Last Dance” for many of its protagonists. Previously, after the murder of his father, Jordan retired from basketball to try his hand at professional baseball, emotionally understandable to get away from the pressure, but also incredibly arrogant that he would be elite at a second sport. When the first team players throughout the baseball league go on strike, Jordan refuses on principle to cross picket lines as a minor league player to step up and replace them as the team owners were agitating for. What to do next, why he goes back on his retirement and rejoins the Bulls. Not only that, he doesn’t want his old number 23 shirt because that was the only number his late father saw him play in. So he opts for his old college number 45, but after a sticky run of performances, he abandons that sentimental notion for the sportsman’s superstition and reclaims number 23. I bet Nike were relieved, since the 23 Bulls shirt had become iconic. But this just strikes me as diva behaviour, tell the media that you’re making this decision for such and such reason and then go back on it in double short order. But this is hardly unique to Jordan. One of Pippen’s rebellions was when he refused to go back out to play when a team mate is nominated by the coach to take a game-winning attempt at the basket, because Pippen with Jordan playing baseball, sees himself as the leader of the team. Funny kind of leader who refuses to play. Now we all know that erstwhile Madonna squeeze and bestie of Kim-Jong Un, Dennis Rodman, is a complete fruitcake, but in many ways I have more respect for him than Jordan. He knew what he had to do to decompress when the stress got too much, probably because he’d come very close to suicide before joining the Bulls. He got away from the game, sometimes without notice or permission, but he always came back and was right on his game. As Jordan himself says, Rodman never let anyone down on the court. If there’s anyone who comes out of this with dignity and respect, it’s team coach Phil Jackson, a compassionate, deep-thinker whose philosophy extended to life outside of the goldfish bowl of pro-sports. 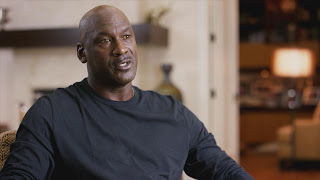 Again, there’s no doubting Jordan’s superstar status, the Black Jesus as he modestly dubbed himself, “Air’ Jordan as he was dubbed for his ability to hang in the air at the end of a jump and which of course, he took to Nike for the first shoe they made for the new joint venture brand. Jordan developed from mere sport’s icon to a full-on cultural one. He was a role model and yes that makes unreasonable demands, but his gambling aside (and maybe the ever-present cigar, not a great look for a honed athlete before and after games), he does seem to have a clean cut image. Barack Obama is interviewed and says what an important figure Jordan was for the Afro-American population which can’t be doubted either. However, when back in his home state of North Carolina, the odious and barely disguised racist Jesse Helms was standing for re-election to the Senate against Afro-American Harvey Gantt, Jordan was asked to endorse Gantt, but dismissed it with a flippant comment “Republicans buy sneakers too”. Now there’s no compunction for celebrities to get involved in politics, but the nature of the way he did it, suggests that Jordan was no Muhammad Ali and therefore one has to question exactly what kind of role model he was. His status as a cultural icon seems to come down to the merchandising and fashion brand Air Jordan, that so permeated the world’s street fashion market; a commercial cultural icon rather than a spokesman. Give me Roy Keane any day.

Find The Last Dance on Netflix