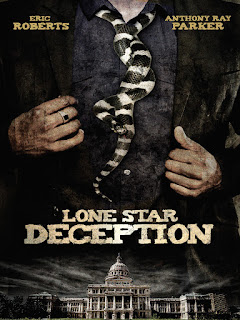 "Fear, Greed and Texas Politics" as Eric Roberts stars in Lone Star Deception, out now On Demand from TriCoast Entertainment. Watch the trailer...

Bill Sagle (Eric Roberts) is a wealthy Texas oilman who likes to control the political scene as much as he likes to make money. Faced with declining fortunes brought on by $40/barrel oil, he sees an opportunity to use his political savvy to save his business as well as his personal narcissistic lifestyle. Bill puts a plan into play that risks the lives of many who have no way of knowing the depth of his guile, and a long-time employee, Tim Bayh (Anthony Ray Parker), becomes the first black candidate for the Governorship of Texas. Tim faces his own demons, having to decide to quit what has become a dangerous venture, or risk his and his family’s safety in his own personal desire for a ‘place in history’. Unintended consequences of both men’s plans collide as they continue their personal quests, creating a political drama that could only take place in Texas.