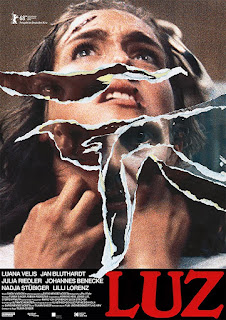 Out on Digital release from Monday 1st June, Ren Zelen shines a light on Luz ...

Luz is a cryptic, supernatural chiller and the directorial debut from writer-director Tilman Singer. It hearkens back to the horror style of the 1980s, offering grainy 16mm film, a creepy mood and an unsettling, synth-heavy score. It is the kind of film that will be enjoyed by fans of David Lynch or Peter Strickland, but Singer creates his own brand of surreal eccentricity.

It’s challenging to describe Luz’s narrative because it’s far from straightforward. The film begins with a long-fixed take - a Chilean-born taxi driver called Luz, (Luanna Velis) staggers into a German police station. Possibly injured, she nevertheless weaves casually toward the vending machine, slips in a few coins in and buys some soda.

Meanwhile, the man at the reception desk continues unconcerned, sorting through his papers. Then, Luz teeters back to confront him and suddenly screams at him in Spanish, “Seriously? Is this how you want to live your life?!”

The second scene moves to a dingy bar with only two customers, a man and a woman sitting at opposite ends of the counter. The woman, a redhead who we learn is called Nora (Julia Riedler) starts up a halting conversation with the man whom she ascertains is a psychiatric doctor called Dr. Rossini (Jan Bluthardt).

She moves closer to him and between drinks and snorts of some kind of powder she keeps in a pendant around her neck, Nora insists on telling him about a girl she used to know back in Chilean Catholic boarding school. The friend we soon learn, was Luz.

Apparently, Luz made a reputation for herself as a troublemaker back in boarding school. The last straw came when Luz managed to persuade another girl to take part in a demonic ritual, once she’d convinced her that she was pregnant. Luz chanted a profane and blasphemous version of The Lord’s Prayer and somehow, whether she had intended to or not, succeeded in summoning something unholy. It may be that this demonic presence is still pursuing Luz by means of changing its host bodies as it tries to get closer to its goal.

After a sinister occurrence in the bathroom of the bar involving Nora and the doctor, we return to the police station, where Dr. Rossini puts Luz under hypnosis and takes her through an extended interrogation. A (possibly) transgender policewoman is also present to supervise the proceedings and a nervous male translator is set up in a booth, ready to interpret what Luz might be saying during hypnosis in the many languages she is apparently fluent in.

The blasphemous variation on the Lord’s Prayer is often repeated, and we get what seems to be a re-enactment by Luz of the events that led up to demonic possession, played out as if it were an improvisational piece.

The ‘characters’ portrayed explain themselves to each other in a deadpan tone and we are led to understand that the redhead Nora was possessed by the demonic entity while in Luz’s taxi. However, the demon has now passed from Nora to Dr. Rossini in its longing to be reunited with Luz. As the events are acted out, the doctor is soon cross-dressing, dying his hair with blood to make it red, and generally scaring the hell out of the translator holed up in the booth.

There are flashbacks to the school in Chile where Luz is punished by the nuns and the schoolgirl from the demonic ceremony suddenly joins everyone in the police station which is now populated with characters that the demon seems to be able to jump in and out of.

Luz enacts a car crash, sings songs to the girl and eventually the makeshift interrogation room/theatre is filled full of fog. Dr. Rossini/Nora, the schoolgirl and the policewoman appear and disappear out of the mist, presumably enacting a process of attacking or defending their position.

It is indeed, a very surreal and bizarre way of telling of a horror story – using multiple languages and pantomime, juxtaposing extensive, slow takes and some memorably grotesque images. The settings are mostly empty, with the actors sometimes used as if they were art installations and Luz being played with harsh intensity by Luana Velis.

Luz is barely a feature by standards of running time (70 minutes) even with occasionally funereal pacing, because there really isn’t enough narrative material to sustain anything longer. However, in certain ways the film is an impressive debut - Singer succeeds in using every penny of his low budget. His movie employs a striking and inventive soundscape by composer Simon Waskow and uses haunting images and interwoven flashbacks to create an eerie otherworldliness.

But in his effort to perplex and disorient the viewer, Singer can disconnect us from the story. As the viewer begins to decipher what is going on, they may find it harder to become involved in the events. The movie seems to be confident about where it’s going and what it’s doing, the only problem may be that the viewer isn’t sure if they have the patience or energy to go there too.