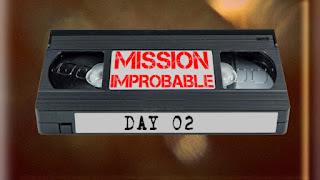 Your mission should you choose to accept it is to let Steve Taylor-Bryant's brain explode whilst thinking as he plays Mission Improbable: Day Two...

The Mission (please make it stop) should I be forced to accept it is each day link an actor the next actor on my list in as fewer steps as possible. I have no choice over the actors chosen or the order in which they appear, it’s basically Six Degrees of Kevin Bacon but at gunpoint… during my social isolation. Anyway, I shall go from the previous day's actor to the new actor, supply some film titles or a directors name, maybe some trailers for your enjoyment, starting with Tom Cruise and ending in 31 days with Tom Cruise. Susan? This sounds complicated have I covered everything? Oh yeah! I am not using Google or anything so I may not take the most direct route, or the journey that you are expecting me to. Some may be done in one move, some may take a few because I am basically relying on my own brain…

Okay. I can do this. My last selection starring Nicole Kidman, Far and Away, was directed by Ron Howard. Ron Howard also directed A Beautiful Mind starring Russell Crowe…


Russell Crowe was also in Body of Lies with Leonardo DiCaprio…


Leonardo DiCaprio was in Gangs of New York with Daniel Day Lewis!