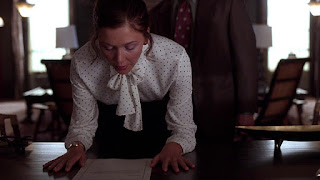 With Secretary turning 18 over the weekend, Ren Zelen takes a look at why the film totally spanks Fifty Shades of Grey...

Shainberg’s film, however, manages to be neither exploitative nor prudish, and even occasionally rather wickedly witty.

In Secretary, Maggie Gyllenhaal plays Lee Holloway, an erstwhile psychiatric inmate who accepts a job as secretary to an uptight, obsessive-compulsive lawyer, Mr. Grey (James Spader). Grey soon begins quietly criticizing her work and appearance and demanding that she perform even the most menial tasks meticulously, according to his instructions. His exacting demands have clearly made all his previous employees quit the job.

Their connection first emerges when Mr. Grey notices scars from Lee’s self-harming habit and determinedly sits her down for a talk. She is taken aback by his gentle approach as he reveals that he entirely understands the psychological reasons behind why she does this - she’s not been used to this kind of tolerance and compassion.

Mr. Grey may have his own needs to contend with, but he is clearly acutely attuned to Lee – more so than her family or her timid boyfriend, Peter (Jeremy Davies). Grey calmly decrees that Lee shall not feel the need to cut herself again.

Surprisingly, this works, as Lee's desire to obey Grey has become stronger than her other compulsions. Grey senses this, and the next day he calls her into his office for her first spanking. Though initially it proves shocking to the viewer and hard for us and for Lee to understand, Grey is giving her what she needs. He becomes a steely Pygmalion, whose instructions as to how she should dress, do her job and even eat, begin to give her life shape and purpose.

Secretary might have been a lesser film, merely dealing with a boss abusing a vulnerable subordinate - the pornographic stereotype of the submissive female which reflects situations where women are in inferior positions as maids, secretaries, or schoolgirls. So what is it about Secretary that saves it from reinforcing this stereotype?

Undoubtedly it is the complex character of Lee, who exhibits increasing confidence as the story progresses. Lee and Grey forge a strong psychological and sexual bond. As their relationship becomes more overt, initially with Grey as the dominant and Lee as the submissive, Lee learns to accept herself and to express her masochism in a situation which is, ironically, less harmful to herself.

Her typing mistakes become deliberate and her participation in Grey's games sees Lee's sexuality blossom. She begins to control how she wants him to see her, leaving sexy pictures of herself on his desk. She becomes more assertive as she finds ways to provoke him when his attentions wane.

It is Grey who becomes ashamed of his sexuality, at one point writing her a letter saying "I'm sorry. This is disgusting. I don't know why I'm like this," eventually ending the relationship out of guilt, declaring "You have to go or I won't stop," even though Lee clearly doesn't want him to. When Grey fires her, the angry slap Lee gives him is harder than any of the smacks he's given her backside.

Grey loathes himself so much that he cannot believe that Lee craves what he provides for her, "We can't do this 24 hours a day," he argues. "Why not!?" she retorts. The trope of the abused woman and the controlling man is inverted. Lee rejects a conventional relationship by breaking her engagement to Peter and goes on a mission to win Grey back.

She shows immense strength and determination in her prolonged sit-in at Grey's desk, and when Peter attempts to remove her, she physically attacks him – revealing that she is actually far from submissive, unless she herself decides to be.

Here is a touching tale of two cripplingly shy people, unable to communicate with each other except through S&M role-play, but we never feel that Lee is unsafe with Grey. As a contrast we witness the clearly abusive relationship between Lee's mother and father that drives her to harming herself in the first place. In his private offices, Edward Grey creates a safer world removed from the real cruelty of the world outside. Lee and Grey are layered characters with real chemistry, and it's genuinely involving to watch the highly unusual dynamics of their relationship grow.

Spader is perfect as Grey, having cornered the acting market in dysfunctional sexual males in Sex, Lies and videotape and Crash - but it’s Maggie Gyllenhaal that owns the screen. She's sweet and sexy and fearless, and handles the transition from meek to empowered without abandoning her character's core identity in a masterful performance (pun intended). 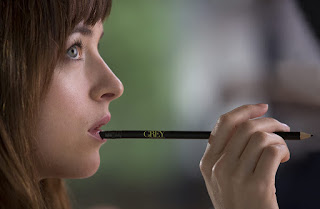 50 Shades director Sam Taylor-Johnson, who reportedly clashed with author E.L. James over every aspect of the film, improves it greatly by discarding the authorial voice of the book (Anastasia’s risible ‘inner goddess’) and where James’s ‘unspeakable’ written dialogue does slip through, it’s inevitably played for laughs.

James’s Mr. Grey, as played by Jamie Dornan, is blatantly a fantasy figure - a billionaire cypher filling bespoke suits, wearing thousand dollar watches and tootling around in his personal helicopter. (Mr Dornan has a task eliciting four shades out of his character, let alone 50).

Dornan, with his tousled hair and manly build, is a physical match for this clichéd role - sweeping a gullible ingénue off her feet and grooming her for his needs, but disappointingly for the inexplicable number of female fans, the movie features little of Dornan and a lot of Johnson. The female is submissive to the point of baring all from every angle, whereas the guy is dominant enough to keep the camera from straying anywhere he doesn’t want it to – the ‘hot guy’ draw is the con-trick of the movie.

The herculean effort comes from Dakota Johnson, who works hard with director Taylor-Johnson to salvage the character of Anastasia Steele, the book’s simpering ninny. Taylor-Johnson attempts to imbue Ana with some vestiges of empowerment - when Grey goes too far, Ana posits the comment that maybe a man who desires to hurt women (always consensually) ought, perhaps, to look within himself? The move then offers an unresolved ending (in order to prepare for the sequels).

With 50 Shades of Grey Sam Taylor-Johnson makes a game attempt, but only succeeds in crafting a slick, unexceptional film as vacant as Christian Grey’s high-rise apartment.