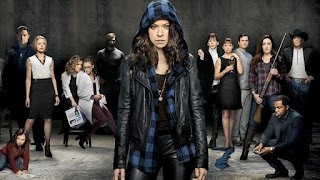 The cast of Orphan Black will reunite online for a two-episode table reading this Sunday...

The reading, which marks both Mental Health Awareness in May and International Day Against Homophobia, Transphobia and Biphobia, is to be streamed from the official Orphan Black Facebook page this Sunday, May 17th at 3:00pm ET/ 12:00pm PT which is 8pm BST.

Orphan Black follows Sarah (Tatiana Maslany), an outsider and orphan whose life changes dramatically after witnessing the suicide of a woman who looks just like her. Sarah assumes her identity, her boyfriend and her bank account. But instead of solving her problems, the street-smart chameleon is thrust headlong into a kaleidoscopic mystery. She makes the dizzying discovery that she and the dead woman are clones... but are they the only ones? Sarah quickly finds herself caught in the middle of a deadly conspiracy, racing to find answers.

The confirmed cast for Sunday includes:

who, along with co-creators, Graeme Manson and John Fawcett, executive producer Kerry Appleyard, writer Will Pascoe and co-producer Mackenzie Donaldson, will read episodes 106 and 107 from the show's acclaimed first season.

Sarah's hunt for answers is interrupted by a trip to the suburbs. Alison's paranoia has boiled over, putting all the Orphans at risk. But when Sarah, Alison and Beth's worlds dangerously collide, Sarah must decide who to trust with her secret.

With Paul missing, Sarah is forced to confront the conspiracy head on. But when Paul learns Sarah has kept essential information from him, the fragile trust between them threatens to shatter. Meanwhile, Cosima grows closer to Delphine and the dangerously fascinating Dr. Leekie.

Fans will also be able to stream the original episodes for free on BBCAmerica.com for the next two weeks.


Tatiana Maslany said: "Kristian Bruun and I started talking about the idea of doing an OB reunion back when everything had shut down. We wanted to show love to Clone Club and help raise some money for people who are disproportionately affected during this difficult time. We chose two charities, CenterLink and Sistering Toronto. CenterLink supports over 250 LGBTQ community centers across the world. Our LGBTQ fans have always been deeply important to us. Sistering Toronto helps at risk, socially isolated women and trans people in Toronto, who are certainly in dire need right now of support, resources, and healthcare. In addition to raising funds, we hope that we can bring some joy to the fans, something intimate just for them, make them feel connected to the Clone Club community even if we're all far apart. Going back to first season for some nostalgia and iconic moments. All of the cast and producers and writers did a zoom chat the other day to discuss things and none of us wanted to hang up. Our show was always about family and community and sestrahood, so bringing us all back together for this just felt right."

Sarah Barnett, President of AMC Networks Entertainment Group and AMC Studios added, "At a time when the world is sharing this strange experience of being together apart, we're happy to reunite with our friends to bring the Clone Club something special at home. This incredibly talented cast and creators are reuniting for the first time since our series finale to shine a light on the critical work being done by CenterLink and Sistering. A special thank you to Tatiana for championing this and for continuing to capture the hearts of audiences around the world."

David Fortier and Ivan Schneeberg, Co-Executive Chairmen of Boat Rocker Media and Executive Producers of Orphan Black also said they were "delighted to collaborate with BBC America and Tatiana Maslany to organize a virtual reunion of the Orphan Black family seven years after the series' launch to celebrate International Day Against Homophobia, Biphobia and Transphobia," adding that "With so many people feeling isolated in lockdown, this one-off event will not only bring our loyal Clone Club back together in a fun, innovative way, it will also help raise awareness and funds for LGBTQ+ communities and at-risk women in need."