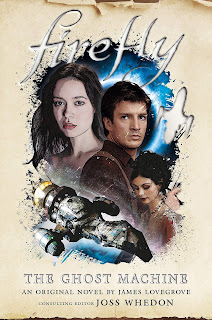 Susan Omand pulled on her browncoat and read Firefly: The Ghost Machine by James Lovegrove, published next week by Titan Books...

As we start our story, set between the end of the TV series and the beginning of the film, the crew of the Serenity find themselves short-handed, with both Shepherd Book and Inara off doing their own thing. Mal and the others head to the planet Canterbury to pick up a consignment for the ever dodgy Badger from a bunch of even dodgier cowboys. The package is a gently humming flight case of “technical equipment” that has been appropriated from Blue Sun and, as soon as Mal sees it, he reneges on the arrangement, refusing to take it. Jayne, however, has other ideas, and picks up the case on his own, smuggling it on to the ship. The package, though, is not all that is seems and, soon, most of the crew are in a trance experiencing their wildest dreams, everything they ever wanted, until those dreams suddenly become nightmares…

The first thing I’d say is that this book, like the other books in James Lovegrove's tie-in series [read Susan's review of The Magnificent Nine here - Ed] is probably not a jumping on point for the Firefly franchise. It works a lot better as a story when the hallucinations that the crew experience make sense to you, i.e. WHY these would be the crew members’ deepest desires, because you are already familiar with the character traits and relationships of the crew members. If you are already a fan of the franchise though, this story makes an excellent addition to the Firefly universe. James Lovegrove has really captured the characters well, I could hear their voices in my head as I read. He has also managed to expertly intertwine five separate strands together in a way that you don’t lose track of whose story is which, quite a feat when the crew members seem to appear in one anothers’ dreams as completely different people, depending on who is having the dream. However this doesn’t mean that the main plot itself is over-complicated, with the simple but brilliant concept of the machine at its core. The action, both in-dream and on the ship, is also very cinematic and sometimes very full-on, with some quite psychological and violent scenes, and I would have loved to have seen this story play out on screen.

All in all, a very enjoyable book for Browncoats everywhere and an action-packed distraction from the current stresses of the real world.

Firefly: The Ghost Machine is published on 15th June by Titan Books