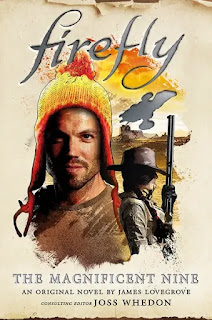 Captain Mal Reynolds is in a fix. He’d like nothing more than to find honest smuggling work that stays under the Alliance’s radar and keeps the good ship Serenity in the sky. But when an old flame of Jayne Cobb’s sends a desperate plea across the galaxy, his crew has other ideas.

On the arid, far-flung world of Thetis, the terrifying Elias Vandal is threatening to overrun the town of Coogan’s Bluff with his trigger-happy army. He wants control of the only thing standing between its people and dustbowl ruin: their water supply.

When the crew land at the hardscrabble desert outpost, they discover two things: a savage outlaw gang who will stop at nothing to get what they want, and that Jayne’s former girlfriend, Temperance, is singlehandedly raising a teenage daughter, born less than a year after she and Jayne parted ways. A daughter by the name of Jane McCloud…

I’m the first to admit that I’m fashionably late to the Firefly browncoat brigade. Having missed the short-lived series when it first came out in 2002, I finally made the effort to see what all the fuss was about a few years ago and watched the box-set. By watch I mean binged. Several times in quick succession. Yes, I got hooked on the space western, loving all the characters, the settings and the stories, and I didn’t want it to end. But end it did, in somewhat unspectacular fashion with the inexplicable early cancelling of the series after only 14 episodes and, although some loose ends were tied up in the feature film finale Serenity, I was still left wanting. Therefore, when the chance came along from the gurus at Titan Books to read a completely new adventure based in the Firefly universe and starring the original crew, I took a chance. Would it bring back the warm and happy feelings of watching the original series or would it be a gorramn sell-out?

I needn’t have worried. This is definitely a book that will have fans of the series cheering as it fits right in, as it says in an Author’s Note at the start, between the end of the TV series and the events in the film, and ably continues the adventures of Captain Mal Reynolds and the crew of the Firefly class ship Serenity. It is a book for the fans though, as it makes a lot of assumptions that you will already know the characters, how they look and how they are with each other, will understand the ship’s layout and are aware of some essential backstories from the TV series, as this story doesn’t spend a lot of time on description or padding, instead dropping you straight into the plot.

As plots go, it’s a thrilling read, with a rip-roaring main story and a clever little side-arc, much like the almost stand-alone TV episodes themselves. There’s not much depth to the tale but, in this case, that’s a very good thing as you don’t get bogged down in complexities or anything that will slow up the breakneck pace of the action. But that inherent simplicity of story doesn’t mean that it’s a dull or predictable read or that you will be left feeling corners have been cut; I was hooked from the start, in just the same way as I was with the TV series. I binge-read the book cover to cover in a single day it was such good fun and I could really “see” the story unfold as if I was watching it on a screen, so cinematic was the writing. James Lovegrove is a fantastic adventure story author but I’m sure that this visual feel was also enhanced by having Joss Whedon on hand as a consulting editor.

So, if you are a pining browncoat, whether a long-time fan or a latecomer like me, and you’re looking for a new adventure with familiar friends, I highly recommend The Magnificent Nine. It is, indeed, Magnificent.

Firefly: The Magnificent Nine is now available to buy