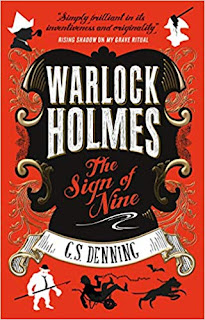 The game's afoot as Titan Books announce the publication in May of the next Warlock Holmes book by G S Denning, with The Sign of Nine...

Warlock Holmes may have demons in his head, but now Dr. John Watson has a mummy in his bloodstream. Specifically that of the sorcerer Xantharaxes, who when shredded and dissolved in an 8% solution, results in some extremely odd but useful prophetic dreams. There’s also the small matter of Watson falling for yet another damsel-du-jour, and Warlock deciding that his companion needs some domestic bliss…

Last year, Warlock and Watson had readers in stitches over their hilarious antics in Warlock Holmes: The Hell-hound of the Baskervilles. Now join them in a brand new collection, containing nine rip-roaring adventures that will delight Holmes fans new and old!

G.S. Denning is the author of the acclaimed Sherlock-fantasy mashup series Warlock Holmes, including Warlock Holmes: A Study in Brimstone and Warlock Holmes: The Hell-Hound of the Baskervilles. He has a background in improv and has performed with Ryan Stiles and Wayne Brady. He lives in Las Vegas with his wife and two children.

Warlock Holmes: The Sign of Nine is published on 21st May