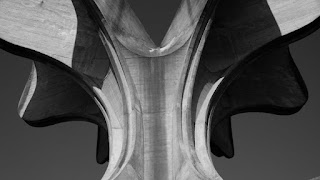 BFI Distribution announces that Last And First Men, the debut and only feature film by the Oscar-nominated Icelandic composer Jóhann Jóhannsson, narrated by Tilda Swinton, will be released on demand on BFI Player on 30th July 2020...

Ahead of the release, the film, which was completed posthumously, receives its UK premiere from 3rd – 5th July at EdFilmFest at Home the online version of this year’s Edinburgh International Film Festival (EIFF), taking place from 24th June – 5th July 2020.

Two billion years ahead of us, a future race of humans finds itself on the verge of extinction. Almost all that is left in the world are lone and surreal monuments, beaming their message into the wilderness...

Last And First Men, which premiered at the 2020 Berlin Film Festival, was a long-term passion project of Jóhann Jóhannsson (The Theory of Everything, Sicario, Arrival), developed over many years and completed by his collaborators after his death in 2018 aged 48. Artfully combining music, image and narration, he described it as “a film that straddles the border of fiction and documentary. It is a meditation on memory and failed Utopia, contextualized through the literary mode of science fiction.” 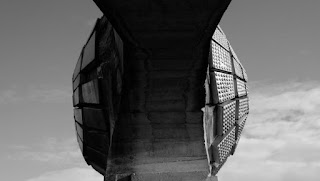 Jóhannsson’s mesmerising orchestral score is set to 16mm black and white footage shot by cinematographer and co-producer Sturla Brandth Grøvlen (Victoria, Rams) of the extraordinary giant abstract brutalist monuments known as Spomeniks, erected during the communist era in the former Yugoslavia. Over the futuristic-looking yet decaying monumental landscape, the narration is provided by actor Tilda Swinton, based on Last and First Men: A Story of the Near and Far Future, a visionary cult sci-fi novel written in 1930 by British author Olaf Stapledon.

Accustomed to using visual elements in his live performances, Jóhannsson had previously made Super 8 and 16mm shorts. His debut short was End of Summer (2015). The concept for Last And First Men is based on his multimedia work of the same name; the world premiere live performance of which was presented at the Manchester International Festival in 2017 with the BBC Philharmonic orchestra.

Born in 1969, Jóhannsson released his first solo album “Englabörn in 2002. He has scored numerous films including several by Denis Villeneuve. The Miners’ Hymns, his collaboration with renowned filmmaker Bill Morrison (Decasia), was released on DVD by the BFI in 2012. Jóhannsson won a Golden Globe for Best Original Score in 2015 for his work on The Theory of Everything, the story of Stephen Hawking, and Oscar nominations for his scores for both Sicario and The Theory of Everything. He received BAFTA nominations for both these scores and also for Arrival. The soundtrack to Last And First Men was released by Deutsche Grammophon digitally and on CD/vinyl earlier this year.

After Johansson’s death, his team of collaborators on Last And First Men returned to complete the advanced edit, with sound artist and composer Yair Elazar Glotman finishing the music. As well as digital release and theatrical screenings the production team hope that the film will tour with live orchestras in the future.

BFI Player is the greatest global cinema on demand; the go-to destination for all film lovers in the UK, that offers a different type of streaming experience. There are brand new releases to watch on rental and a subscription service expertly curated by BFI programmers and special guests, offering classic and cult films. Recent collections include selections by Tilda Swinton and Bong Joon Ho and a huge range of Japanese cinema in JAPAN2020. Also available, completely free for anyone to view, are films and collections from the BFI National Archive and regional archives, including 120 years of BRITAIN ON FILM. BFI Player is accessible through the BFI website and through a range of video platforms, including Amazon Prime Video and Apple TV. BFI Player Subscription offers a 14-day free trial and is then £4.99 a month. https://player.bfi.org.uk/