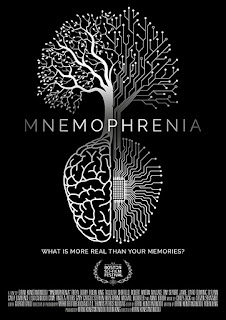 "What is more real than your memories?" Ren Zelen recalls watching Mnemophrenia...

Anyone who knows me knows that I am a total sci-fi nerd and that my favourite kind of sci-fi is the kind which deals with ideas, with ‘what if’ scenarios – ‘what if we could predict crimes before they happen’, ‘what if it became impossible to tell the difference between synthetic ‘people’ and actual humans’, ‘what if we could implant false memories or erase real ones’ etc...

Sci-fi doesn’t just exist in the form of escapist adventure stories about space exploration, it can also examines potential scientific and technological developments and the ethical dilemmas and philosophical questions which might arise depending on which path we take.

The premise of the film suggests that, with the use of brain-implanted chips which record every emotion and event, people may be able to live through another individual’s thoughts, feelings and experiences regardless of whether that person is alive or dead, as long as they had agreed to have the chip implanted.

However, it transpires that this advanced form of virtual reality and its prolonged use in much of the population has brought about the existence of a widespread condition called Mnemophrenia.

This condition is defined as having both real and artificial memories but being unable to differentiate between the two. Sufferers cannot be sure which of their memories they have actually experienced and which they have acquired during their forays into virtual reality. Also, in their eagerness to escape from their own humdrum lives and having artificially lived through the lives of others, the sufferers tend to lose a sense of their own identity.

The narrative flips between three different story lines, each following a different generation of the same family. The first tale concerns Jeanette Harper (Freya Berry), a young woman who discovers that a man she has memories of and who she fell deeply in love with never actually existed. This discovery leaves her shattered enough to seek therapy. Here she tries to sift through and reclaim pieces of a life that has been influenced by a love affair that never happened. 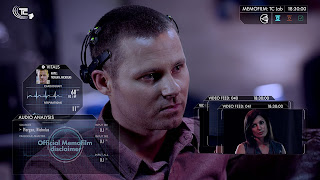 The next arc sees Jeanette’s grandson, Nicholas Morgan (Robin King), a tech wizard in the process of developing a revolutionary new virtual reality technology for a company called Total Cinema. During its testing process he and his assistant Will (Jamie Laird) make the discovery that this new form of VR tends to trigger Mnemophrenia in one hundred percent of users, including those not generically pre-disposed to the condition.

Nicholas himself was born with Mnemophrenia and, contrary to general attitudes, he embraces the condition, going as far as being linked to FLM, a group of pro-mnemophrenia activists who are interested in the tech he is creating.

However, the smooth-talking corporate bigwigs that fund his work are set on releasing this potentially harmful product, just as long as they get return on their investment.

The last generation of the family is Robyin (Tallulah Sheffield), a young woman in a loving marriage who is given the tragic news that she is terminally ill. A dedicated academic involved in VR research, she obtains a surgically implanted VR chip in her brain in order to access the experiences of her ancestors but also to record and catalogue her own experience of dying.

Despite the reservations of her husband Charlie (Robert Milton Wallace) who fears that he is losing her to the other identities she is accessing, Robyn firmly believes that her research in entering the innermost feelings and experiences of others will help people to empathise, furnish them with the wisdom of those that came before, and may even be the next evolutionary step for humanity.

Writer/director Konstantinidou does not offer a definitive solution regarding the use of this advanced form of VR, she just presents us with a debate on the morality of our ever-increasing habit of inputting personal data, and how computer algorithms might process and use this information.

The differing perspectives of the three principal characters as mediated through the VR tech is shot by three separate cinematographers - Mirjo Beutler, Petros Nousias and Richard Thomas. The film also creates its hi-tech future ambiance by superimposing digital information onto the screen, such as visual feed, audio analysis and a reading of vital signs.

Much of the film was improvised, as Konstantinidou felt that this would make the characters more realistic. To facilitate that aim, she shot the film in chronological order so that the actors playing the various characters would have the previous time periods to use as a reference point. (She even cites the actors as co-writers).

This works to a certain extent. Certainly, it gives a sense of naturalism, but it also generates a lack of coherence. The film does not have the continuity and pacing of a more conventionally scripted film, and the improvised acting can sometimes be hesitant, slow and stilted, which hinders the viewer from engaging fully with the narrative.

In Mnemophrenia, Konstantinidou has certainly presented us with an intriguing premise which picks up on sci-fi themes partially explored in several novels, such as Charles Platt's ‘The Silicon Man’ (1993) as well as in films such as Douglas Trumbull’s Brainstorm (1983) and Kathryn Bigelow’s Strange Days (1995). Her film does serve as a conscientious examination of the moral dilemmas and possible consequences of a technology which is becoming increasingly prevalent.

Many foresee VR as the medium which will eventually replace film, television, and gaming. One wonders how long it may be before many of us find that we really aren’t sure which of our experiences are authentic and which are merely virtual, and will we even care?