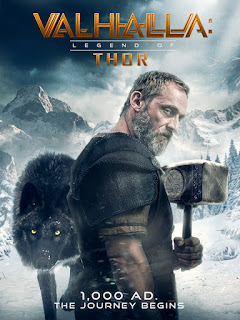 No, not Marvel's Thor, the real Scandinavian one. Coming to DVD and Digital HD later this month thanks to Signature Entertainment, watch the trailer for the Valhalla: Legend of Thor...

The Viking children Tjalfe and Røskva live in the land of the humans, Midgard. A visit from the God of Thunder and his companion, Loke, becomes a fateful encounter when Loke tricks Tjalfe into breaking one of the bones on Thor’s goat. As a punishment Tjalfe and Røskva are brought along on an adventurous journey to the land of Gods, Asgard.

Directed by Fenar Ahmad and the team behind the film Darkland (2017), Valhalla: Legend of Thor is a live action remake of an animation remake of a comic book story that took inspiration from classical Scandinavian legends. That is to say the film is based on the classic Nordic folk tales that were told in Peter Madsen’s comic book series. The comics were then adapted into a family friendly animated feature called Valhalla in 1986 but the new film is very different.

Producer Jacob Jarek said in an interview recently, “The original film was more of a family film, we’re going a bit up in age, make it a bit darker and appeal to that same audience who watches Lord of the Rings.” He added that the challenges of shooting in a Danish studio then on location in another three countries was worth it for the value on screen. “We need different nature to build sense that this world is big,” he says. “We’re building three worlds: Midgard the world of humans, Asgard where Valhalla is, world of gods, and then the evil chaotic forces in Udgaard.”