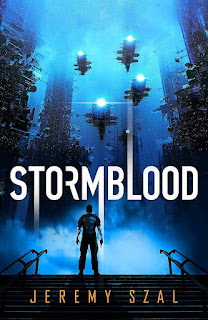 Susan Omand plugged in her AI and read Stormblood by Jeremy Szal, now out from Gollancz...

Well, this book was not at all what I expected! I came to the book without knowing anything about it and, from the title (I hadn't at that point seen the cover art), I was expecting what a friend of mine calls “dragons n shit” – a high fantasy, swords and sorcery malarkey – probably due to it sharing a name with a Final Fantasy computer game expansion pack. Instead, what I got was a brilliant military sci-fi space-opera thriller involving alien biotech, war veterans, hackers, AI and authority figures whom you were never quite sure were on the “good” side.

Vakov Fukasawa used to be a Reaper: a bio-enhanced soldier fighting for the Harmony, against a brutal invading empire. He's still fighting now, on a different battlefield: taking on stormtech. To make him a perfect soldier, Harmony injected him with the DNA of an extinct alien race, altering his body chemistry and leaving him permanently addicted to adrenaline and aggression. But although they meant to create soldiers, at the same time Harmony created a new drug market that has millions hopelessly addicted to their own body chemistry.

Vakov may have walked away from Harmony, but they still know where to find him, and his former Reaper colleagues are being murdered by someone, or something - and Vakov is appalled to learn his estranged brother is involved. Suddenly it's an investigation he can't turn down . . . but the closer he comes to the truth, the more addicted to stormtech he becomes.

It is truly remarkable for a first novel! The world-building is superb and I was totally immersed in the sights, sounds and smells of the different “floors” in Compass, the hollowed out asteroid that provides the main setting for the story. There are definite shades of Bladerunner about how it all looked in my mind, with a class system dictating where and how people lived – the nearer the base of the structure you live, the less affluent you are. Action-wise, too, the book was a definite page-turner and it kept up a breathless pace from beginning to end. It really helped that the story itself was not an overly complex one with hundreds of characters and lots of intertwining threads, as can sometimes be the case with these sprawling tales. This simplicity is very deftly accomplished by having Vakov narrate everything from his own, first-person, viewpoint; something that is quite difficult to do well but Szal has managed his main character effortlessly.

And, for me, it is the characters that make this story so very engaging. Vakov himself is multi-layered and his internal monologues provide a highly credible backstory to explain why he is how he is – both physically and emotionally. But this same attention to detail is also given to the more minor characters in the book. My favourite was Vakov’s hacker best friend Grim and I really found myself rooting for them throughout their many battles.

Is it the perfect book? Well, it depends on what you’re looking for. As I said before, the story, once you get to the crux of it is not complex but it is highly entertaining and the final battle is very “Hollywood” friendly, being all action and explosions. I could seriously see this book adapted for the big screen without losing any of the nuance of the writing and it would be a great fun watch.

It’s fantastic to know that this is just the first book in a trilogy, as I look forward to meeting Vakov and co again to see how the next part of the war plays out, but that doesn’t mean that Stormblood feels like a “book one” in the way some do – there’s a lot more than just character building and scene setting here and it makes a very enjoyable read in its own right.