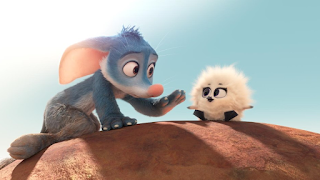 With lots of films and shorts available to watch online this week at the We Are One Global Film Festival, Susan Omand heads down-under and encounters Bilby...

If you thought film festivals were all about indie film studios think again. There's not one but three Dreamworks short films in the programme of the We Are One Global Film Festival. Before I talk about this specific film, though, can I say what a wonderful idea the We Are One film festival is: many different film festivals around the world coming together to provide some of their best curated films and talks, available free online for a short time, with the option to donate to a very worthy Covid related cause. It's a fantastic way for those who would not otherwise think of going out to a film festival to get a taster of the kind of things that are on offer and lets those who would love to go but are too far away, indulge their inner film geek from the comfort of home. Right now, I would be gearing up for a month of attending Edinburgh Film Festival which, as it should be, has been cancelled because of the virus outbreak, so this has definitely been a superb alternative for me and one that I hope will continue as an annual event, even once things return to "normal" - whatever and whenever that will be.

However, on to this film. My favourite of the Dreamworks offerings (the others are Bird Karma and Marooned) is Bilby - about a little rodenty thing who finds a fluffy chick on the middle of the Australian outback and feels obliged to keep it safe from all the nasties that you would expect to find in Australia; snakes, scorpions, piranhas, evil gulls - you name it, in Australia everything will eat you!

As you might expect from Dreamworks, the animation studio responsible for the likes of Shrek, Madagascar, Kung Fu Panda etc etc, the animation is second to none and the characters are so endearing,  this time slightly anthropomorphic but not humanised, if you know what I mean. They were made to look cute in a big eyed anime sort of way but still acted like the animals they were, rather than speaking and joking around. The comedy is though still laugh out loud funny, quite a feat these days when there is no dialogue and it did, in that way, remind me of some of the silent comedies with a lot of physicality. The story was not all fun and laughter, and I did find myself actually worrying about both rodent and chick in the "big event" (no spoilers) near the end of the movie, because I had become so attached to the wee characters, as they had to each other, within the space of a few minutes.

From reading the chat in the comments of the film, this short was meant to be a proof of concept for a full length feature back in 2017 but I can kind of see why it didn't get any further - it's exactly the same premise as the 2002 film Ice Age, where those guys looked after an unhatched egg, even down to the stag beetle with his berry echoing Skrat and his acorn. But that doesn't make it any less of a lovely little self-contained short animation and definitely worth a few minutes of your time to cheer up another lockdown day.

Image - We Are One