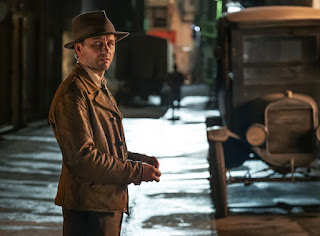 "You know his name, but not his past." Perry Mason, starring Emmy winner Matthew Rhys, premieres on Sky Atlantic and HBO this month. Watch the trailer...

Set in 1930s Los Angeles and based on characters created by Erle Stanley Gardner, this new HBO original drama series, which comes to Sky Atlantic on June 22nd, follows the origins of American Fiction’s most legendary criminal defence lawyer.

Living check-to-check as a low-rent private investigator, Mason is haunted by his wartime experiences in France and suffering the effects of a broken marriage. L.A. is booming while the rest of the country recovers from the Great Depression — but a kidnapping gone very wrong leads to Mason exposing a fractured city as he uncovers the truth of the crime.

Tatiana Maslany is Sister Alice, the leader of the Radiant Assembly of God, preaching three sermons a day to a hungry congregation and a radio audience that spans the country. Entertainer, politician, God’s conduit to the City of Angels, Sister Alice wields great power when she speaks, and plans to use it in ways only she can know.

John Lithgow plays Elias Birchard “E.B.” Jonathan, a personal attorney at the nadir of his career and a semi-regular employer of private investigator, Perry Mason. A mentor and a father figure to Mason, E.B. is handed the kind of case he hasn’t seen in years: a high-profile parallel investigation to the LAPD involving a case of child kidnapping.

Chris Chalk is Paul Drake, a beat cop with a knack for detective work, Paul is an outlier, with the added challenge of having to navigate an extremely race-conscious city and a downright oppressive police department. He must weigh the responsibilities of being a husband and father against his desire to seek justice in a controversial and politically loaded case.

Shea Whigham plays Pete Strickland. Pete is hired by Mason as an extra set of eyes on his various investigations (some less than savoury). Strickland has a brotherly rapport with Mason and a cheerfully rakish demeanour that wins friends and influences damsels.

And Juliet Rylance is Della Street, E.B. Jonathan’s legal secretary. Street has the brains, know-how, creativity and drive to be a CEO at any modern-day corporation. But this is 1931…

Tim Van Patten — whose directing credits include the Game of Thrones pilot along with episodes of The Sopranos, Boardwalk Empire, Sex and the City, The Wire, The Pacific, Rome and Deadwood — will direct and executive-produce the series. Ron Fitzgerald and Rolin Jones will act as showrunners. Both previously served as producers on Weeds and Friday Night Lights. Fitzgerald has also executive-produced Westworld, while Jones served as an executive producer Boardwalk Empire. They’ll executive-produce Perry Mason along with Amanda Burrell, Robert Downey Jr., Susan Downey, and Joe Horacek.