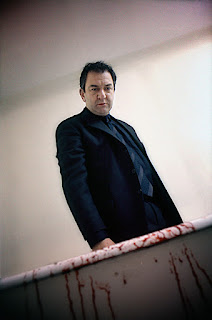 Steve Taylor-Bryant delves into the murky world of religious murder as he watches Messiah, no not that one, the other one, the one from 19 years ago as he gets back to Watching the Detectives…

I love British crime drama. We seem to blend the darkness of Scandinavian television with a little of the razzmatazz of our U.S. cousins whilst still managing to base most of our dialogue on frustrated sighs, as is our way. We have some rightly much lauded shows in the history of British television from all of our major channels, satellite or terrestrial, and if you ever talk to a Brit about crime dramas you will hear many titles discussed whether it's Line of Duty, or Silent Witness, or Prime Suspect, or even Cracker from back in the day. I know this for a fact because I am a Brit who has these conversations. Never in the last 19 years though has anyone I have talked to mentioned Messiah so when I came I came across a DVD box set of all five Messiah stories and it was very reasonably priced [He means cheap – Ed] I thought I would give it a go, obviously it's going to be bad because nobody talks about it and we all know the opinions of the British public are to be trusted don’t we? Well, I really do not understand why this show is not on the tip of everybody’s tongue, it is astonishing. It is suitably dark, intelligently written, superbly cast, contains equal amounts of creative bloodshed and frustrated sighing, it has personal consequences for the investigating officers at a higher rate than any other British crime show I can remember, and it's just two episodes per season so you get really immersed in one story rather than a crime of week like many other shows.

In Messiah 1 as I am going to call it as the rest of the series are numbered and apparently Netflix has a show with the same title, we are introduced to Detective Chief Inspector Red Metcalfe (Ken Stott who played Balin in The Hobbit films about walking and jewellery or something), a dour Scot (is there any other type of Scot? [Oi! Oh, no, wait, you're right. As you were - Ed]) with some personal issues stemming from his past. Red had been called to his brother's flat where there was a dead girl in his bed. His brother, Eric (Kieran O’Brien – Chernobyl), begged Red to help him out, to make the body go away. Instead Red handed his brother over to the police and Eric served 18 years for murder before being released on licence and not at all welcoming to his brother's attempts to reconcile. Red is also haunted by an accident that happened on that fateful date where driving in the rain he hit a child with his car by accident but fled the scene, to this day not being able to drive in the rain without a mental breakdown. In the modern day, Red and his team consisting of D.I. Kate Beauchamp (Frances Grey – Vanity Fair) who is new to the team, D.S. Duncan Warren (Neil Dudgeon – Midsomer Murders) a gambling addict who is being hassled by his ex-wife, Helen (Gillian Taylforth – EastEnders), for child support payments and is on the verge of losing his son and his house. There is also young D.C. Jez Clifton (Jamie Draven – Billy Elliot) and their commanding officer D.C.S. Emerson (Art Malik – Borgia).

The case that the team is working on develops into a serial killer investigation where the murderer cuts out his victims’ tongue and stuffs a silver spoon in their mouth. Despite the signature the modes of the killings are all different, some hanging, some beatings, some being skinned and with the help of the Reverend Stephen Hedges (Edward Woodward who was great in everything he did. Fact.) who is looking after Eric since his prison release, the team realise that the murderer thinks he is Jesus Christ and is killing his Apostles in the ways they died in the Bible. The team are now racing against time to stop 12 murders all being committed on the corresponding Saints Day in the calendar.

I shan’t go any further because this would end up filling the article with spoilers and, as we have already discovered, none of you have ever watched Messiah and because I am telling you that you must you will of course do as you are told and I don’t want to ruin it for you. What I will discuss though is the intelligence with which this show was written. Based on the book by Boris Starling, himself a man with a very interesting life, and helped to the screen by Lizzie Mickery who has been involved in writing some extraordinary shows and TV Movies and is currently scribing on the new Snowpiercer show, the basic plot of a murder investigation is elevated to something much higher than you usually get on television. The complexities in the murders, the investigative story, and the outcome are some stunning world building elements bettered only by how very rich they have made the characters, Red Metcalfe in particular. Maybe in 2001 before the advent of streaming the show was considered too smart maybe? Because if this level of writing gets released today by the BBC, or Netflix, or HBO it is winning every award out there. Honestly, the writing is on a par with any crime drama much more popular since streaming and pay per view came into effect. It's okay having great writing but you still need to turn those words into something visual and the cast, all of whom I have seen in other things, have never been led so magnificently as by Ken Stott, who delivers the dialogue with eloquence but plays out every emotion so painfully on his face he must have been exhausted at the end of each days shooting. Rarely do you find an actor who can act so much of a complex story with a look or the rub of a brow but if there was an Emmy for physical acting Stott would be a shout. The rest of the cast take their lead from Stott and are all award worthy performances, highlights include Draven as Jez Clifton, and Michelle Forbes as Red’s deaf wife Susan Metcalfe who manages to do so much with so little in Messiah 1 but gets slightly more of a role in the 2nd.

I’ll not go on about Messiah 2: Vengeance is Mine, Messiah: The Promise, or Messiah: The Harrowing all starring Stott as D.C.I. Metcalfe or Messiah: The Rapture where Marc Warren takes over as D.C.I. Joseph Walker, because they all deserve articles of their own once I work out how to do it without excitable spoilers, so I will get to them at a later date. What I will say is that you seriously need to give Messiah a go, it deserves its chance to be included in those crime dramas conversations we all have, to not do that would be criminal.