Book – From Bayou to Abyss 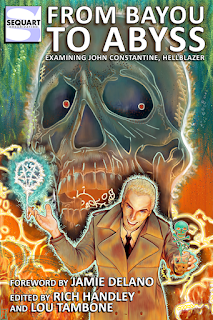 Steve Taylor-Bryant delves into a collection of essays about THE British occultist as he reads From Bayou to Abyss: Examining John Constantine, Hellblazer from Sequart Organization, edited by Rich Handley and Lou Tambone…

By the very nature of their construction, comic book characters are divisive. They are created by one writer, developed over time by other writers, taken to the screen by somebody else, all the time building fans of certain storylines or creative teams, which is great, until you and your mates argue over who did the best issues, or who did the best adaptation.

Enter Sequart Organization who take the divisive nature of comic books away and instead give you a forensic examination of an entire history. They are the equivalent of a grown up coming into the room and telling the squabbling children that it's okay to like different storylines and here is why. I have read just about all the books from Sequart at this point (highlights are probably Moving Target, or The British Invasion, or Improving the Foundations but it’s a Wednesday when I am writing this and Thursday’s highlights will probably be different) and whilst I love the ‘One Person’ take on a character like I got in Moving Target, the collections of essays are fascinating as you read a book that has twenty odd points of view, that pick up on twenty odd different character traits, that examine twenty odd different print runs or visual stories and, when you have that much insane depth and love in a book, it's very hard not to like it.

The best example of an essay collection I had read up to this point was Shot in the Face: A Savage Journey to the Heart of Transmetropolitan, which was highlight after highlight, but was written about a book series and character I already loved. The difference with Constantine was that I enjoyed the Keanu Reeves film, and some of a run from many years ago, but I knew very little about the character. I always saw him more as a guy that pops up in someone else’s story as a guest, albeit often an unwanted guest, like they did in the Arrowverse, like he was in Swamp Thing when he was created. What I lacked was an education on the character, his traits, his cohorts, the kind of rounded knowledge you normally only get from reading every issue. From Bayou to Abyss allows me that catch-up, to fill those gaps, to allow me a glimpse of the past as well as a look at what the future may hold.

There is an intro from Jamie Delano; I say intro, it's more a love letter to a character Delano obviously loved being a part of bringing to a bigger audience. There are looks at specific storylines, essays on Constantine’s sexuality, on his sidekicks or characters he runs with for a while, chapters on creative teams and how they influenced the character, but most importantly there is grown up, well-educated viewpoint on every page. From Bayou to Abyss is like reading 170 pages of comic fans' doctoral dissertations and having that incredible level of love and knowledge for a subject rub off on you. It does not just entertain you; it makes you smarter without actually having to do the work yourself. I like that in a book.

From Bayou to Abyss: Examining John Constantine, Hellblazer I found to be a book I needed. I lacked the knowledge to be part of the conversation, I lacked the education in a character that is a lot bigger than I ever gave him credit for, and this collection of essays has made me love a character I didn’t think I needed to. Whilst Shot in the Face was pure entertainment, as I knew what it was about, From Bayou to Abyss became more important because of the educational value. A must read for fans and those like me that needed a kick in the arse. And, by the way, how good is that cover by Leah Mangue?