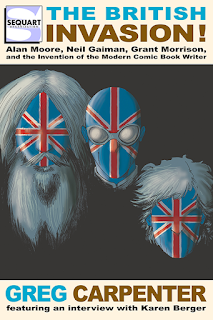 Steve Taylor-Bryant continues his educational year in comics by reading The British Invasion! Alan Moore, Neil Gaiman and the Invention of the Modern Comic Book Writer by Greg Carpenter and published by Sequart Organization...

They came from Northampton, West Sussex, and Glasgow, and even though they spoke with different dialects, they gave American comics a new voice — one loud and clear enough to speak to the Postmodern world. Like a triple-helix strand of some advanced form of DNA, their careers have remained irrevocably intertwined. They go together, like Diz, Bird, and Monk… or like Kerouac, Burroughs, and Ginsberg… or like the Beatles, the Stones, and the Who.

Taken individually, their professional histories provide an incomplete picture of the British Invasion, but together they redefined the concept of what it means to be a comic book writer. Collectively, their story becomes the story of mainstream comics in the modern era.

2019 is the year that I fill in all the missing knowledge from a few decades of not reading comics. I have my challenge from the boys at Madius Comics to read the titles they think are essential reading and, on the historical front, I discovered Sequart Organization late last year when I received Moving Target: The History and Evolution of Green Arrow by Richard Gray as a gift from my children. Sequart is full of very smart people, much smarter than I, and reading their books is like experiencing a fun doctoral thesis if there is such a thing. The in-depth analysis of whatever subject a book covers is flawlessly researched but in no way do you ever get the feeling of being talked down to, you are educated but feel like you are having a chat with a friend; that is a rare gift in non-fiction books. The next title on my list of wonderful books from Sequart is The British Invasion! Alan Moore, Neil Gaiman and the Invention of the Modern Comic Book Writer by Greg Carpenter which, believe it or not, I thought I knew a fair bit about. Turns out I was very wrong, my knowledge extended to the equivalent of clickbait headlines.

Each chapter of Carpenter’s book takes one of three writers’ history and explains the how’s, when’s, and who’s starting with their early careers and working through the 1980s and 1990s before reaching this century and around about 2015. I did know some of the early pre-DC history of the writers, mainly Morrison from the documentary Talking with Gods, but after a few pages of having that knowledge refreshed we hit America and DC and those headlines I thought was all I needed to know were expanded upon and then some. Not only does each chapter about the writers give you the background of their lives at the time, but more importantly it tells you in no uncertain terms the state of the comic book world at the time which leads to the work produced by Moore, Morrison and Gaiman and how they elevated the craft of storytelling within the medium by radically changing what the medium could do, making comics more literary. Not so much high-brow, but of an educational level above the norm without spoon-feeding its audience, proving that comic book readers aren’t as dumb as they were being treated, and showing that non comic book readers would be willing to give them a go if it wasn’t all spandex and sex.

The titles each took on and recreated were fascinating, I hadn’t a clue about Moore’s work on Swamp Thing so these particular sections fascinated me, and the way each writer seemed to follow the other, then lead, and how their careers intertwined was also educational. The parts of the book that I gained the most knowledge from, that piqued my interest, were the sections on Neil Gaiman. As a younger man I had tried reading some Gaiman novels and was left frustrated. Not because Gaiman isn’t a world class author, no, I was frustrated that my intellect didn’t let me in on the secret that the rest of the readers seemed to have. I couldn’t access Gaiman like others did but I really wanted to, I just felt I lacked a certain something, some part of my understanding was broken, and I didn’t have the tools to fix it. Carpenter in The British Invasion goes into extraordinary detail about Gaiman and his style, the way he builds his worlds like he would a novel, never pandering to his audience, never going where anyone expected him to and, through the chapters where Carpenter breaks down Gaiman’s Sandman, some part of my mind finally opened up and I, all of a sudden, had the ability to find Neil Gaiman accessible like the rest of you. Knowing how he went about his craft, why he bucked expectation and took so long to get where the story had to go, meant that I immediately went out and bought Sandman vol1.

For some The British Invasion may just be a very well written version of a truth they already know, it may not have any impact on how they enjoy their storytelling but for me, and I’m hoping many of you so I don’t feel so lonely in my stupidity, it is an essential guide into the minds of three legendary writers but also the way the comic book world works.