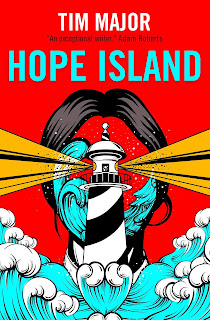 With the book out now from Titan Books, author Tim Major shares with us five of his major [I see what you did there - Ed] influences when writing his latest thought-provoking science fiction novel Hope Island...

Workaholic TV news producer Nina Scaife is determined to fight for her daughter, Laurie, after her partner Rob walks out on her. She takes Laurie to visit Rob’s parents on the beautiful but remote Hope Island, to prove to her that they are still a family. But Rob’s parents are wary of Nina, and the islanders are acting strangely. And as Nina struggles to reconnect with Laurie, the silent island children begin to lure her daughter away.

Meanwhile, Nina tries to resist the scoop as she is drawn to a local artists’ commune, the recently unearthed archaeological site on their land, and the dead body on the beach...


Hope Island is about a British mother and her daughter who visit a remote island and encounter a strange community, creepy children and a peculiar archaeological site filled with ethereal cave song. It’s about my own parental fears, I suppose, but like most novels it was also influenced by various cultural obsessions – such as these five: 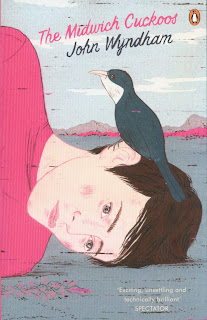 This is by far the biggest, and most overt, influence on Hope Island. I read Wyndham’s tale of evil children when I was about 9 or 10, and it was a massive influence on my reading tastes, and, later, my own writing. And, like other Wyndham novels such as The Day of the Triffids, what complicates the mystery is that there are two mysteries – the behaviour of the children, but also the mystery of everyone in Midwich falling unconscious at the start. Mixing two big ideas was Wyndham’s forte, and I’ve spent my writing career trying to mimic the trick. 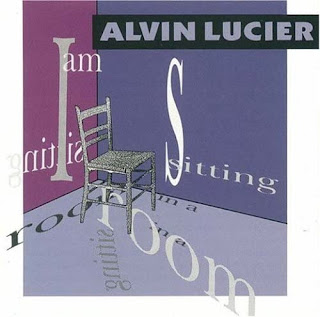 This is a recording of Alvin Lucier doing just as the title suggests – he sits in an empty room, reading a short statement about the nature of his sound experiment. Then, a tape recording of his statement is played back in the same room, echoing slightly, to be recorded. Then again, that new recording is played back and recorded… and so on, until the acoustics of the room gradually transform the statement into hums, drones and bell-like sounds. It’s incredible, I tell you. In Hope Island, a member of an artistic community records the sound of empty spaces, arranging the markedly different silences as part of a peculiar project, and several of the horror setpieces involve sound, too. 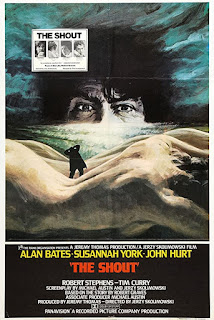 This under-appreciated film is about a mysterious man, Crossley (played by a monstrous by Alan Bates), who worms his way into the lives of a young couple, Rachel (Susannah York) and Anthony (John Hurt), at first using his charisma but then threatening to perform a ‘terror shout’ learned from an Aboriginal shaman. All this is alarming enough, but it’s Anthony’s occupation that secures this as one of my favourite films – he’s a sound recordist tinkering with field recordings and sound effects in his home studio. This foregrounding of sound (as a danger and as a defence) was a huge influence on Hope Island. 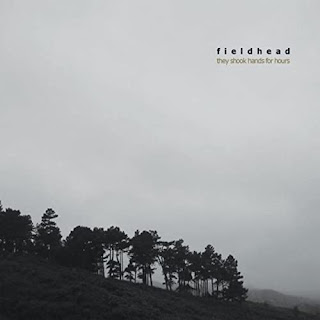 My musical tastes influenced Hope Island to quite a degree – I’ve even created a Spotify soundtrack for the novel. This Fieldhead track doesn’t appear on the soundtrack, but it’s a good example of the kind of music that I responded to. There’s plenty of disorienting, ambient swirls, and crashes of something portentous… but it’s a particular moment that I love. At the halfway mark a Kid-A-esque beat kicks in, and at around two minutes something happens. While the clicks exist alongside the drone, in between the clicks is… what? Another sound? Silence? It feels like going deaf, or turning your head really fast, losing aural information. I’ve listened to it many dozens of times, and I’ve never been able to put my finger on the nature of the illusion. 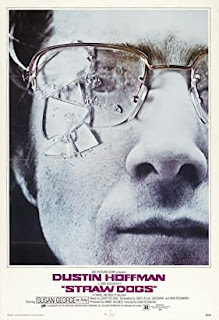 I’ll be honest, I’m not at all a fan of the second half of this film, but its depiction of an isolated and mistrustful community is incredible. There’s also the fact that this alienation is exacerbated by the main character (played by Dustin Hoffman) coming from another country, making him more inclined to excuse the behaviour of the locals as idiosyncratic but not necessarily murderous… In Hope Island I flipped the nationalities, having a British woman encroach on the community of a remote island off the coast of Maine.


Many thanks to Tim Major and Titan Books for letting us share this fascinating article. Hope Island is available now from Titan Books - https://titanbooks.com/70004-hope-island/