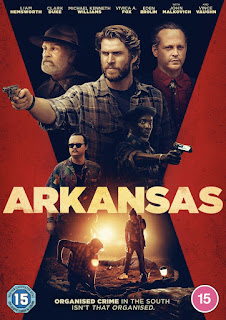 Our ever-organised kingpin Steve Taylor-Bryant watched Arkansas, out on DVD next week from Lionsgate...

In Clark Duke’s directorial debut, Kyle (Liam Hemsworth) and Swin (Clark Duke) live by the orders of mysterious Arkansas-based drug kingpin, Frog (Vince Vaughn), who they’ve never met. Posing as junior park rangers by day, they operate as low-level drug traffickers by night, all under the watchful eye of Frog’s proxies (John Malkovich, Vivica A. Fox). Swin settles into his day job but, against orders, takes up a relationship with a local woman (Eden Brolin), while Kyle spends his nights trying to discover Frog’s identity. As they begin to grapple for control of the lucrative underworld operation, Swin and Kyle soon find themselves under Frog’s deadly crosshairs. Who will live to survive as the boss of Arkansas’ fierce drug trade? Based on John Brandon’s best-selling book of the same name, ARKANSAS weaves together three decades of Deep South drug trafficking to explore the cycle of violence that turns young men into criminals, and old men into legends.


Arkansas is a wonderfully weird little film. It's not quite a linear tale, yet it is, it's not quite a traditional gangster movie, yet it has its moments, it's not a comedy film, yet it has some hilarious examples of cock-up humour and a great cast that play them straight as an arrow, it doesn’t contain characters of great depth, but that lack of depth is very much the film's charm. It's… what is the word? Refreshing, maybe? Eclectic, perhaps? Whatever the word, I thoroughly enjoyed Arkansas but am very sure that many of you won’t. It’s the kind of film that appeals to me, that feels very much like it was made just for me to watch, it finds entertainment in the benign, it doesn’t need grand gestures, or a complicated plot arc, or any action set pieces to get under your skin, it sort of just finds a way there and makes its home.

It is not your typical drug dealer film. You don’t see any of the after effects of drugs, there are no addicts, or overdoses, it is not a film that preaches the dangers of drugs, it's just a film about some guys that happen to be in the drug dealing game, and their strange little lives. It's not a conventional film about organised crime, in fact in part of the narration it explains that organised crime in the southern states of the U.S is far from organised, and yet the film shows a complex structure that seems to work accidentally rather than by some well thought out act, and it's this aspect of the job that leads to the huge cock-ups that make up the majority of the film. It is a reaction to complexity by simple minds and it is played out on screen just wonderfully by a perfect cast.

Liam Hemsworth, as the silent, brooding, hard man type Kyle teamed up with actor and director Clark Duke as the geeky, strange Swin, is a tag team you didn’t think you wanted until you got it and they play off each other remarkably, making the differences in their characters work despite the fact they really shouldn’t. A brief appearance by John Malkovich as Ranger Bright adds another layer of weirdness to the story, and Vince Vaughan almost steals the whole film with one of the most understated performances of his career as Frog, the man at the top of the chain. He plays the role quietly, calmly, without emotion almost and he is a blast to watch because he confounded every expectation I had for his role, he made Arkansas a joy to watch and elevated the film above perhaps where it would have landed with someone else in that pivotal role.

Duke has brought you a great film that is not what you would expect and, whilst for some viewers, it just won't grip them, for me it was a most enjoyable couple of hours.