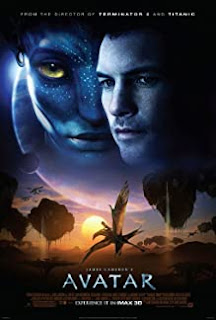 After news that the Avatar sequels [all 4.3 squillion of them - Ed] have been pushed back because of the Coronavirus outbreak, Kraig Taylor-Bryant looks at some of the themes from the original film...

Ever wondered what Independence Day would look like if the Alien invaders were in fact humans? James Cameron’s Avatar tells that story because it needed to be told, one which considers that perhaps it will be humans who will be the most dangerous form of life to explore space, whilst clearly illustrating what makes us so harmful to our own environment and other forms of life.

I’ve been a fan of James Cameron’s other famous pictures of course, Terminator was a wild ride to watch, aliens was a wonderful action flick, and Titanic was an emotional tragedy story based on a true event, it seems right that he work on a more thought provoking piece such as this. Although it is only now that I finally got around to watching Avatar, as initially the length of the film threw me off a bit, as nearly 3 hours is not the film length I’ve gotten used to in the films of today.

So, what exactly am I talking about when I mention “thought provoking” ideas and illustrating humankind’s harm to life? Well, I’m talking about how Avatar intentionally reflects mankind’s desire to take from others for their own profits. The film early on mentions that the marines on this space mission are now “hired guns” from a company that expects to get its money back from travelling to another world. Already this story is different from other space adventures because, instead of considering the mission as an opportunity to explore and colonise a new world, there are also those that insist on exploiting it for its resources, and this already can be compared to how our use of fossil fuels is heating up our atmosphere and endanger wildlife.

For the humans in this story, it’s hard for them to see the point of view of the intelligent life on the planet, as the majority of the marines have been placed on the world to fight the natives and push them off their land if need be. So who better for the film to put into the shoes of than a disabled veteran named Jake Sully (Sam Worthington) who understands the ways of being in the military, but perhaps not how the military works in this scenario. With Jake naturally being new to exploring space, he’s the best person for us as the audience to follow as, when everything about the world is explained to him, it’s explained to us, even when Jake monologues himself, mentioning that because of the state of the economy he can’t afford to get the legs he needs to be able to walk again.

Jake Sully can also relate to both sides in this war between the natives of the planet Pandora (the Na’vi) as well as the humans, because we can understand that, similar to the Na’vi he knows what it’s like to be prejudged, as soldiers tease Jake from the moment he gets off the “plane”. It’s a similar case with the Na’vi as they are referred to by names such as “monkeys” and “savages” which, again, are names we can link back to how we used to (and some still do use these words) refer to both the native Americans who were slaughtered in the colonisation of America and how people of varying ethnicities have been mistreated. So in that way Jake understands the prejudice quickly of how he’s been informed about this race of people based purely on the views of Colonel Miles and other superiors (Stephen Lang) that pre-judge them. 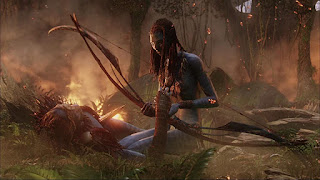 The way these messages are conveyed is not blatantly obvious, but hidden amongst the story, as nobody mentions the harm they’re doing to Pandora but we can see it in one of the shots of the film as Jake lands on the planet. We’re not told directly that the events of the film are a repetition of history but it’s obvious enough if you look for it. But the film certainly make it obvious from the get go, the character gets so caught up in the old fashioned military speeches that the Colonel is giving at the start that it’s as if the director is hiding the fact that the humans are the antagonists, by showing both sides as naturally friendly.

One of the themes that did become apparent to me later was the military vs science tone of the film. The film contains the desire for exploration and learning that humans have in other space films, but through the scientists, but as shown in Sigourney Weaver’s character, Grace, it’s obvious that she is anxious about having Jake on her team when exploring the natives. This is something we as an audience could understand because history shows us that there are scientists and invent with the best intentions only to have them misused for the purpose of war/destruction, so we already understand the divide between science and military in some cases.

As Jake enters his Avatar (an Alien body that is created for a human to inhabit), he is instantly excited by the idea of feeling free to run around on his own legs, which becomes the perfect opportunity for him to develop the desire to explore places that he may otherwise not have been able to explore when in his wheelchair.

When Jake Sully first encounters a Na’vi, named Neytiri (played by Zoe Saldana), we are introduced from a military perspective, the first thing we see her do is attempt to kill Jake before deciding not to, and when she decides to speak with Jake we first have no idea what she is saying, to intentionally make us as sceptical and uneasy as Jake does, but as the film goes on it gives us a clear idea of what these people are really like, and why they are so protective of their land, which is because they understand the beauty of it. But it’s not until much later that we see what humans are capable of when the military decide they are tired of waiting for the natives to leave their land and beginning rolling their massive trucks in to destroy trees and perhaps people, to get to the resource that they want. This again reflects the deforestation that we do to our own planet, but it is through the natives’ desire to preserve life that we might consider how we as a race should protect nature.

The film ends in an almost perfectly controversial way, most of the human soldiers are sent back to our “dying Earth” and those that were chosen got to stay on Pandora, leaving Jake to transfer his mind into his avatar permanently, showing his desire to not be human anymore, which is something the audience will either find understandable or perhaps they may see Jake as crazy for choosing to do this.

I think this film is more important than ever in a time where America’s president intends to launch a program to colonise deeper into space, though I can’t help but wonder, with the release of Avatar sequels, what more is there to tell of all of these messages about humanity, or is it just going to be a repetition of the themes in the first film, which may or may not reach audiences who haven’t seen the first film, and would therefore be perfect to educate them. Maybe the sequels are purely to earn money and top Avengers Endgame at the box office, regardless, I’ll be intrigued to find out.
Follow Kraig on Twitter @Kraigandhismac
Images - IMDb
Email ThisBlogThis!Share to TwitterShare to Facebook