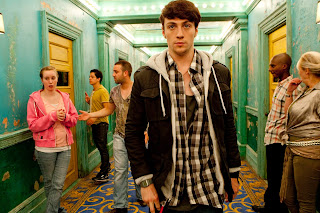 Chatroom is an uncomfortable watch – it is a harsh examination of one of the cruellest and most dysfunctional activities that the internet has made possible.

William (Aaron Taylor-Johnson), a restless young man, creates an internet chatroom he calls by the innocuous name of ‘Chelsea Teens!’. Four other young people enter, curious as to what the chatroom has to offer. The young strangers are the troubled Jim (Matthew Beard), the pretty proto-model Eva (Imogen Poots), the driven Emily (Hannah Murray) and working-class Mo (Daniel Kaluuya).

It isn’t long before they're all seduced by William’s confident, fast-talking and charismatic persona. What they don’t know is that William is a dangerous loner who finds it next to impossible to interact normally with people and who is using cyberspace to channel his most negative and destructive impulses.

These impulses are generated by his miserable relationship with his own family – by his desire for attention from his successful mother (Megan Dodds), the author of a series of popular time-travelling adventure books for young people, his prickly relationship with his exasperated father (Nicholas Gleaves) and his hatred for his successful older brother Ripley (Richard Madden), after whom his mother has tellingly named the protagonist of her stories.

He tells none of this to his new friends in ‘Chelsea teens!’. Instead he creates another identity, one which he adjusts in order to insinuate himself, manipulate or trigger the other participants. He styles himself as an understanding listener, as a mentor, a lover or an advisor, depending on what the personalities of the group seem to need, and then he sets to work on them individually, systematically winning their confidence and then subtly playing on their weaknesses to undermine their wellbeing and their lives. Soon he is targeting the most vulnerable participant with the sole aim of pushing him to the brink of suicide.

William is schooled in cruelty by his own trawl through the darker corridors of the web. He’s a fascinated secret observer of some of the most grotesque bullying, or mock-benevolent suicide clubs that populate its corners. 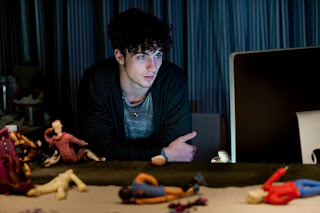 Chatroom has ambition, trying to examine the expression of these sinister and sometimes inexplicable tendences. It is based on a play by the celebrated Irish writer Enda Walsh, and is directed by Japanese horror film supremo, Hideo Nakata, best known for the heartbreaking original of Dark Water, and more famously the two Ringu horror films.

Walsh has visualized the grubbier parts of the internet as a rundown hotel with endless corridors populated by weird or dubious people inviting or sometimes luring others into the doors leading to chatrooms. The various chatrooms that belong to the participants, including William’s, are portrayed as actual rooms, physical spaces where the principals talk face-to-face with one another, even though we have to imagine that they're doing this through their computer screens. It’s interesting as a dramatic device, but Walsh, being a playwright, reveals the ‘stagey’ origins of his piece. On film this tends to somewhat undermine the premise of the movie – namely, that in cyberworld you are denied someone’s physical presence and you can never be sure who you're talking to or how much truth there is in what they say. It can be an arena of deception.

Unfortunately, Japanese horror director Nakata, making his English language debut, never seems quite at ease in this milieu. He doesn’t seem to connect entirely with the script or to create much in the way of tension. Some of the scenes set in the real world (locations around Camden and London Zoo) seem oddly melodramatic.

The film does boast an excellent young cast who give committed performances - Aaron Johnson, Imogen Poots, Daniel Kaluuya and particularly Matthew Beard. All these young actors went onto bigger and better things.

The question that remains after viewing Chatroom is how can a person find satisfaction in driving others, people tantamount to strangers, into despair and unhappiness, even to the point of wanting to take their own lives?

In William’s case it seems to function as some kind of vicarious catharsis, but in others it seems to indicate that it is merely the exercise of a perverse and destructive kind of power over those who are weaker. Under the cover of anonymity, the internet provides a playground for bullies, sadists and those who want to exercise malevolent and murderous tendences that they have to repress in ‘real life’.

It's unfortunate that Chatroom was released the same year (2010) as the big-budget The Social Network and Catfish, two sophisticated and insightful films about the digital age documenting the unhealthy and delusional aspects of online ‘friendships’. In comparison, Chatroom seems naïve.

When explaining the premise of Chatroom to a teen, I was saddened by the response that these malevolent aspects are familiar to his generation, raised with the internet. For a generation who were frightened by monsters hiding under the bed or in the closets of our bedrooms, it's horrifying to realize that, for the next generation, the monsters hiding in the dark corners of the internet are truly monstrous, and all too real.