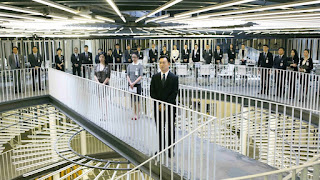 With the film now available to watch on MUBI, a reminder of Ren Zelen's thoughts from LFF2015 on Office...

A Hong Kong Chinese musical in the spirit of ‘How to Succeed in Business …’, dealing with the inner workings of a billion dollar corporation Jones & Sunn – outlining ambition, materialism, greed, intrigue and office romance.

There is nothing surprising about the Hong Kong Chinese creating a classy musical movie. Hong Kongers may be aware of such people as Beyonce, Rhianna and Justin Timberlake, but they have no need of them. They have their own pop music (Cantopop) and their own glamorous and talented music superstars, any one of whom will sell out any arena in the country for a week running and whose records easily outsell any of the above named ‘international superstars’.

Hong Kong director Johnnie To is probably best known for his crime dramas, but like many HK filmmakers, he has been a jack of all trades. He's made ghost stories, rom-coms, screwball comedies and thrillers, and now with Office, he's directed a musical.

Office is adapted from a play called Design For Living, and To embraces its theatrical origins with a vast, open-plan stage-set, designed by William Chang, which resembles the inside of a machine. Design For Living was originally written by actress Sylvia Chang, who stars in this film adaptation playing Ms Chang, a formidable businesswoman who has risen from secretary to CEO. She also happens to be the mistress of Chairman, Mr Ho (a debonair Chow Yun-fat). She stands to make a lot of money when the company goes public but not before the auditors examine the books to make sure that all is in order.

One of her protégés (and lovers),the fast-talking David (Eason Chan) is desperate to conceal the fact that he has embezzled money from the company to fund his habit of playing the stock market. The frantic hustler then manipulates the emotions of the efficient but lonely chief accountant, Sophie (Tang Wei) who is attracted to him, thus giving the story some emotional weight.

Events are viewed through the eyes of two new interns, the keen but naïve young man, Lee Xiang (Wang Ziyi) and the enigmatic Kat (Long Yueting),who isn’t who she claims to be. As the company prepares for the future, individuals jockey for position, but manipulation and betrayal loom ever nearer.

The HK Chinese believe in improving themselves and in prospering – which means making money – a lot of it. This also fuels their love of gambling and playing the stock market. Let’s face it, most of the world is obsessed with money, the difference is that the Chinese aren’t coy about it. It’s what Feng Shui, Chinese New Year and most of the offerings made at the temple are fundamentally about – ushering in luck, because you need luck to win and winning means being rich.

And if you do make it, you don’t hide the fact. You flaunt it with designer labels, expensive cars and jewellery – the real thing only, please (believe me, most Chinese can tell the difference). To paraphrase the lines in a song by a ‘material girl’ character “If your life doesn’t have a ‘label’ then the whole thing is fake”.

I suspect that a lot of the viewing audience didn’t really know what to make of this movie - attendees started sneaking out quite early on. I found it charming, but I have the advantage of having lived and worked in Hong Kong for several years, so I enjoyed watching the Chinese musically satirising their ambitions, lifestyle and modus operandi. The Chinese desire to work hard, to be a model employee and to get on in life are all admirable traits, rooted though they are in materialism and an unshakeable sense of hierarchy.

Much as the West would like to think it makes inroads into the Chinese culture and its markets, it doesn’t really have half the impact it imagines it does. The Chinese are expert at adapting what they want and leaving the rest, and, as they subtly like to remind us – their culture has been around a LOT longer than ours.
Copyright R.H. Zelen – ©RenZelen 2015 All rights reserved.
Images - LFF
Email ThisBlogThis!Share to TwitterShare to Facebook