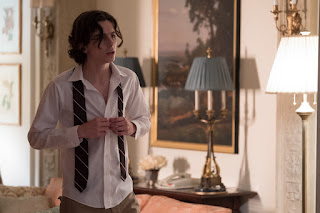 With A Rainy Day in New York coming to Blu-ray, DVD and Digital Download from today thanks to Signature Entertainment, here's a look at the rise and rise of Timothée Chalamet...
Press Release

Timothée Chalamet is one of Hollywood’s hottest young stars, emerging over the last few years with a string of impressive performances that prove he’s more than just floppy hair and youthful good looks. With a major role in Denis Villeneuve’s upcoming adaptation of sci-fi epic Dune, Chalamet’s star is set to rise and rise.

The young star gets romantic in upcoming release A Rainy Day in New York, starring as Gatsby Welles, a student who takes a trip to The Big Apple with girlfriend Ashleigh (Elle Fanning, Super 8) only to become sidetracked when she gets waylaid on a school assignment. Left to his own devices in the city, Gatsby ends up spending the day with Chan (Selena Gomez, Spring Breakers), the sharp-witted younger sister of his ex-girlfriend, attending parties and having his own life-changing conversations and encounters. Through this series of chance meetings and comical adventures both Gatsby and Ashleigh discover that while you only live once, once is enough if you find the right person.
HOMELAND (2012)

Cast your mind back to series two of the long-running spy thriller series Homeland, and you’ll remember a young Chalamet playing Finn Walden, the teenage son of US Vice President William Walden. Starring in eight episodes of the major hit series, Chalamet’s Walden had a turbulent time, accidentally killing a woman in a hit-and-run while out driving with his girlfriend Dana Brody (Morgan Saylor), the ever-in-peril daughter of US Marine Sergeant Nicholas Brody (Damian Lewis). Finn ended his days as people often do on Homeland, in a fiery explosion! Prior to Homeland, Chalamet had starred in a few shows in smaller roles but with a sizeable part on the acclaimed show at the tender age of 16, he was beamed into homes worldwide, flexing his brattish acting muscles to create a loathsome character that fans of the series loved to hate. While not what immediately comes to mind when thinking of typical Chalamet roles, Homeland none-the-less shows a future star in the making!

Amidst the sweltering days and balmy nights of a languid Italian summer, Call Me By Your Name saw Timothée emerge with a performance that would make him a star. Luca Guadagnino’s coming-of-age romantic drama saw the young actor play 17-year-old Elio, who has a sexual awakening one summer when his father’s 24-year-old American research assistant Oliver (Armie Hammer, The Man from U.N.C.L.E) arrives at his family’s idyllic home in Northern Italy. Spending their days together swimming, dancing and cycling, the pair tentatively navigate their feelings as a relationship blossoms. Despite the film being filled with fine performances, including a stand-out supporting role for veteran Michael Stuhlbarg as Elio’s father and Hammer as the brash and confident Oliver, Chalamet’s nuanced performance and youthful sensitivity proved captivating. Already fluent in French, the young actor would have to speak fluent Italian, as well as learn guitar for the role. His efforts were rewarded with an Academy Award nomination. Call Me By Your Name is the first must-see Chalamet performance, and luckily for fans a sequel is currently in the works...

From the renowned independent movie studio A24, Greta Gerwig’s Lady Bird starred Saoirse Ronan as Christine (nicknamed Lady Bird), a high school student in California who traverses her final years of hometown education before heading off to college 'somewhere on the east coast’. Enter love interest Kyle Scheible, a dashing, too-cool-for-school heartthrob played by Chalamet. Sporting the trademark Chalamet floppy hair and pretty-boy looks, Lady Bird is initially taken in by Kyle but ends up ditching him before Prom to go with her best friend Julie (Beanie Feldstein) instead. Lady Bird marked the first of two collaborations between Gerwig, Ronan and Chalamet, the second of which was 2019’s joyous Civil War-era drama Little Women. With Lady Bird and Little Women picking up 11 Academy Award nominations between them, including Best Picture for both films, Gerwig’s collaborations with both actors has proven to be a winning formula that we hope continues long into the future.

A gruelling, hard-edged Western, Hostiles provided a change of direction for Chalamet, sending him back to 1892 to rough it out in the dangerous and violent world of the Old West. The film follows Christian Bale as Captain Joseph Blocker, forced against his wishes to escort an elderly Cheyenne war chief, Yellow Hawk, and his family back to their tribal lands in Montana. Openly loathing the Native Americans, who were previously responsible for the deaths of some of his men, Blocker is now forced to protect them under threat of court-martial. Chalamet plays young Private Philippe Dejardin, the youngest member of the group tasked with taking Yellow Hawk home. Unfortunately for Dejardin, violence simmers from outside and within, and it’s not long before the party is attacked by a group of Comanches with deadly results. Rosamund Pike, Wes Studi, Ben Foster, Stephen Lang and Q'orianka Kilcher fill out the impressive cast of this powerful revisionist take on the violent legacy of the Old West.

Chalamet headed back even further in time to play Henry V of England in David Michôd’s The King, a grim and gritty historical drama about the Battle of Agincourt and the tumultuous politics leading up to the bloody battle. Donning armour, chainmail and a bowl cut that would look more at home in twenty-first century Shoreditch, Chalamet gives a powerful performance as the monarch who achieved a historic victory against the French forces, lead by the Dauphin of France, played by another former young heartthrob Robert Pattinson. The film gives fans the chance to see Chalamet and R-Patz, two of Hollywood’s hottest properties, squaring off in the lead up to the brutal battle with plenty of ye olde insults thrown between them. Based on William Shakespeare’s series of plays about Henry V (the ‘Henriad’), The King gave Chalamet the opportunity to display his classic acting credentials in this modern take on the Hundred Years’ War, showing once again his ability to confidently tackle all and any roles that come his way.