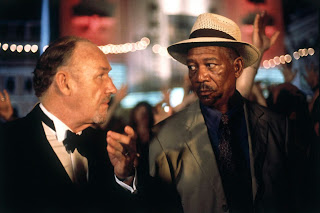 Steve Taylor-Bryant investigates Under Suspicion, out on Digital HD on Friday thanks to Signature Entertainment...

Gene Hackman had apparently long wanted to remake French film Garde a Vue based on the novel Brainwash by John Wainwright and, at the turn of the century, he got his chance, starring alongside Morgan Freeman and Monica Bellucci in Stephen Hopkins' Under Suspicion.
Set in Puerto Rico in the aftermath of a hurricane, Hackman plays wealthy tax lawyer Henry Hearst, beloved by the island's elite, as he prepares to give a speech at a fundraiser. It turns out that Hearst the previous day had discovered the dead body of a young girl in some bushes along the route he jogs and had been the man who dialled the police to report the discovery. Captain Victor Benezet (Freeman) and his detective, Felix Owens (Thomas Jane), have a few more wrap up questions for Hearst that shouldn’t take too long and, from there, we are embarking on a roller coaster of intrigue as the identity of the child killer is investigated.

Under Suspicion is one of those great little crime dramas we used to get twenty odd years ago that were short enough to be a taut thriller but written well enough to star some of the industry's luminaries. Nowadays these sorts of tales are predominantly made for television and, whilst I love a great TV drama, I miss little hour and half, hour and forty minute thrillers, and Under Suspicion, whilst twenty years old,was a good little film to watch in between real life chores. It is a little more Americanised than its French predecessor was but what could have been lost or ruined in lesser hands was lifted up in the care of Hackman and Freeman. The use of flashbacks within the interview segments was not as distracting as I thought it would be and, in fact, helped the film keep a nerve-wracking pace about it.
It is not a contender for best film ever but there is an awful lot to enjoy, primarily the performances of Freeman and Hackman. The two when in a room together just trade skill and talent, neither upstaging the other, and both elevating the story and it is like watching a masterclass in acting that makes me miss Hackman more than I thought I did. Bellucci does what she always does which is subtly enhance a scene and distract the viewer from the direction they maybe should be looking, and the only performance that doesn’t hold up is that of Thomas Jane who comes across as wooden and like he has never acted before. Maybe it was the pressure of standing next to some giants of cinema but Under Suspicion doesn’t make me want to seek out more Jane’s work like it does with Hackman.

Under Suspicion is a snappy thriller with a great twist that handles some disturbing subject matter in a sensitive way without ever allowing the power of the crimes to become diluted. It is a solid film that does not get made in today's environment and makes you wish we had somehow cloned Gene Hackman long before he retired.