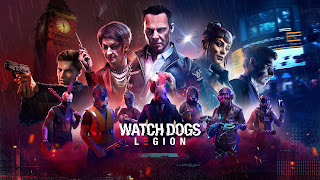 The Watch Dogs: Legion - Tipping Point cinematic trailer dropped last week from Ubisoft. Now you can find out how that short film was created in a behind the scenes look with Alberto Mielgo...

In Watch Dogs: Legion, near future London is facing its downfall… unless you do something about it. Build a resistance and fight the opportunists who have seized power. But sit down and have a cup of tea first. After all, you’re not a bloody monster.

In the Watch Dogs: Legion - Tipping Point cinematic trailer released last week (watch it below) you entered the Watch Dogs Legion universe in an intense chase through a dystopian London created by Emmy awards winner Alberto Mielgo. This piece is the result of an artistic collaboration that will show you how, in Watch Dogs Legion, you can stop being a regular bystander and join the resistance family to get a chance to reclaim your future!

Pretty impressive looking, eh? These things don't just happen though, so here's the behind the scenes look at all the hard work and artistic collaboration needed to create the unique world of that trailer.