CLASSIC DOCTOR WHO ON BRITBOX – The Pirate Planet 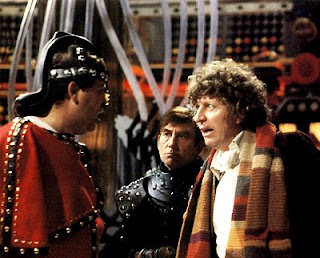 On 26th December 2019, 627 pieces of Classic Doctor Who content were made available to Britbox subscribers. Every Sunday in 2020, our Doctor Who expert, Tony Cross, looks back at some of the classic stories. Here is the Fourth Doctor adventure The Pirate Planet ...

The Doctor and Romana head to Calufrax to pick up the second segment of The Key To Time but after a bumpy landing, they appear to have arrived on a totally different world even though it exists in the same place and time as Calufrax. This hunt for The Key to Time isn't going to be easy, is it?

The Pirate Planet was written by Douglas Adams, whose work I adore. It bears some of the hallmarks of his other work, even featuring a couple of lines of his that crop up in similarish form elsewhere. This isn't a criticism. If a line is good then use it as often as possible I say.

It's also filled with scientific bafflegab. Now whether the science stands up to analysis I'm unqualified to say but the Doctor's final episode explanation of what he is about to do to solve a rather large gravitational problem is a masterpiece of speedily delivered, scientific-sounding stuff that might be nonsense. It sounds good though, which is half the battle and Tom Baker makes it sound 'right'.

There's a lot going on in this script: a planet that materializes and dematerializes; telepaths dressed like Hara Krishna wannabees - the Mentiads; time dams; a not quite dead Queen; a half-mechanical, shouty Captain with his robotic parrot (Polyphase Avatron); streets paved with gemstones; flying cars; a people unwilling to ask questions out of fear and a lot of very stupid guards who can't shoot straight. So it can seem a little overwhelming keeping up with everything.

It just about holds together, even if it frays a little at the edges. The Doctor is at his wittiest and sharpest in this story, racing ahead of everyone - including Romana - to realize what's going on and how to stop it. This is one of those stories when the Doctor really does run intellectual rings around his opponents. It also allows Tom Baker to let the Doctor's righteous indignation out for a little run around for the first time in ages and Tom does appear to be having a lot of fun.

Mary Tamm gets some nice lines to but after Romana has been quite to the forefront of the action in the first episode and a bit she gets less proactive as the story goes on, which is a shame. There's a possibility on the basis of this that Romana might end up suffering from Liz Shaw Syndrome (aka Susan Syndrome). We shall see.

Bruce Purchase does a great job as the shouty Captain. In the hands of a lesser actor the shoutiness would have probably collapsed into something hamtastic but Purchase keeps on the right side of the line. It reminded me of Brian Blessed when he was more than just a beard and a shout. The Captain gets a great line in curses too. I should have written them down for those moments when the use of a proper swearword is inappropriate.

Purchase is ably supported by Andrew Robertson who gives a lovely performance as Mr. Fibuli, the Captain's obsequious right-hand man.

The other guest parts are a little bland and there's not much for them to get their teeth into, with the exception of Rosalind Lloyd as The Nurse who starts off as a background figure but gradually emerges into the foreground as the story rolls along.

The poor chaps that get to play the Mentiads don't get to do much more than stand around looking serious and pale.

The truth is there's too much going on in the story for every character in it to get something decent to do. It's certainly fun. It's intelligent and witty but just a little too busy.

It's not often I say this but The Pirate Planet is the sort of story that could have benefited from two more episodes to give all the characters and ideas room to breathe, even if the basic plot might be stretched to breaking point.