CLASSIC DOCTOR WHO ON BRITBOX – The Ribos Operation 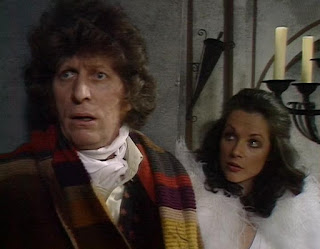 On 26th December 2019, 627 pieces of Classic Doctor Who content were made available to Britbox subscribers. Every Sunday in 2020, our Doctor Who expert, Tony Cross, looks back at some of the classic stories. Here is the Fourth Doctor adventure The Ribos Operation ...

We begin The Key to Time season with The Ribos Operation. The Doctor is alone, except for K9 Mark II, and contemplating a holiday. Unfortunately, the White Guardian (Cyril Luckham) has other ideas.

The concept of the Guardians is a new one. They are beings superior to Time Lords that seem to sit outside the Universe watching. There is no real attempt to explain what or who they are except that it is obvious that they are pretty powerful. Tom Baker emphasizes this not by showing obvious fear but by his scenes with the White Guardian like a naughty schoolboy. All yes sir, no sir and three bags full sir.

Being a script by Robert Holmes it has double acts - The Doctor and Romana; Garron and Unstoffe, and Graff Vynda-K and Sholakh plus a decent level of wit, rather than flat out comedy. The performances rise to the material too.

Ian Cuthbertson's Garron, con-man and blagger, is played to perfection with a smarmy pomposity and pride. His relationship with the younger, less cynical Unstoffe (Nigel Plaskitt) is one of teacher and student with Garron keen to show Unstoffe the perils of honesty in a tough universe. Garron is from Earth - Hackney Wick to be precise - but the Earth he comes from almost seems to be the Earth of the present day. There's some amusement at his - and Unstoffe's - Somerset accents with the Doctor's line about 'perhaps he's a cricket scout...' being a favorite of mine.

The Graff Vynda-K (Paul Seed) is a borderline psychotic warrior prince with an over-blown ego and a tendency to shoutiness. His relationship with Sholakh (Robert Keegan), who is the Graff's long term right-hand man is deeper than the difference in rank might indicate. In fact when Sholakh is dies you might feel their relationship is more than platonic. It certainly pushes the Graff right over the edge, driving him to remember battles past and he goes off to his shouty death calling for Sholakh. It made me think of the relationship is between Achilles and Petroclus, although perhaps I'm reading too much into it.

On the subject of shoutiness this story also features another Prentis Hancock performance. He's not the world's greatest actor Prentis but is reliably angry and shouty. I mention it as in passing as I'm developing a bizarre fondness for his occasional appearances, although (sadly) I think this is his last.

The other performance worth noting is Timothy Bateson's as Binro The Heretic. Quite rightly people have commented on the scene between him and Unstoffe where Binro explains his theory about the lights in the sky being other suns, not ice crystals. It's almost totally irrelevant to the story but it is a lovely little two-hander, played with real conviction. It is therefore one of the more genuinely moving scenes in Doctor Who. It's a master class in showing how to draw emotion from something and someone without laying it on with a trowel.

This is also Mary Tamm's first story as Romana, who has been foisted upon the Doctor by the White Guardian. The Doctor is not impressed and neither, to be honest, is Romana. Romana is played as all academic smarts and ego versus the Doctor's more practical experience (and ego). It's nicely done, especially in the early TARDIS scenes and right at the end.

I suspect the long shot of Mary Tamm that introduces her, which runs from feet to head, is the nearest we've ever seen to a televised letch on Doctor Who though.

So as the first story of a season with one objective it does an excellent job.

Romana is in and nicely-established; the Key to Time concept is explained (if not in great detail) and we are set for the rest of the season.

It's also obvious that we are continuing the tendency towards more humor and 'silliness' that began with Graham Williams's appointment as Producer. The script is filled with wit and there is some nice 'stuff' at the beginning of episode three between the Doctor and Garron in front of the Graff's firing squad, which I enjoyed but might have aggravated a few people who like their Doctor to be pretty serious.

There's definitely a divide between Doctor Who fans who like comedy and those who don't. For example, Donald Cotton is one of the series best Doctor Who writers in my opinion (up there with Robert Holmes and Douglas Adams) but his Hartnell stories used to be looked down upon somewhat for their high comedy level.

Oh and some point I must write something about the Doctor Who tradition of hiding in plain sight. It's a glorious part of the series history, often overlooked and Episode One of The Ribos Operation features a superb example.

Watch it and see.