CLASSIC DOCTOR WHO ON BRITBOX - The Invasion of Time 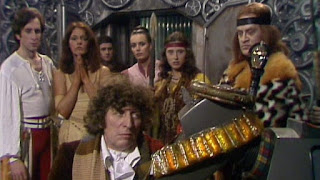 On 26th December 2019, 627 pieces of Classic Doctor Who content were made available to Britbox subscribers. Every Sunday in 2020, our Doctor Who expert, Tony Cross, looks back at some of the classic stories. Here is the Fourth Doctor adventure The Invasion of Time ...

I have said before that there is no such thing as a truly perfect Doctor Who story. Conversely, there is not really a story without something praiseworthy, whether it be a performance, a scene here or there or even just a moment of glory.

The Invasion of Time is one of those bad stories. There is some excellent stuff: Tom Baker's performance in the first three episodes when we are not quite sure what he is up to; Louise Jameson is great; John Arnatt does a fine, dry job as Borusa and Milton Jones as the oily creep Castellan Kelner and the cliffhanger at the end of the fourth episode is a good twist but...and this is a large BUT...fundamentally this story is absolute rubbish.

It's not just the pathetic Vardans who go from Northern Irish wobbly tinfoil floaty things to disappointingly average humanoids in silly hats and boring uniforms; it isn't the long-haired, tribe of the week Time Lord dropouts who live in a giant sandpit outside the Citadel; it isn't the dumb ineptness of the Castellan's soldiers; it isn't Tom's OTT silliness or talking to the camera; it isn't the silly run around inside of TARDIS that fills up a large chunk of the final episode and it isn't even the cockney panda Sontaran Stor (Derek Deadman) who seems to be able to talk only in a sinister whisper whilst failing completely to be anything but absolutely rubbish at conquering Gallifrey. It is all of these things and more.

What makes this story truly awful in my book is Leela's departure. She's staying on Gallifrey because she's apparently fallen in love with Andred (Chris Tranchell). Now whilst I'll admit Andred is the nearest thing to a warrior that Gallifrey might have, he is still dripping wet. Also how - by Rassilon's Rod - do they have time to fall in love when they barely have a moment together that doesn't involve dashing down corridors. It's a shocker of a departure for such an excellent companion and actress. In fact I'd say it is the worst companion departure in the series. Yes, even worse than Dodo's disappearing act. Leela isn't the sort of character to go quietly off with the first bloke who flutters his eyelids at her. And yes I know I'm more annoyed about this than I should be but however you cut it this is a poor send-off. I judge it unfavourably.

I judge this story as a whole unfavorably. It's almost the only story I've watched in my odyssey so far that I've struggled to motivate myself to watch each episode. It's been like the Doctor Who equivalent of dentistry: necessary but unpleasant.

Are there worse stories in Doctor Who history? Possibly. But there isn't a lot and at six episodes in length, it was a more drawn out disaster than any other Tom Baker story so far. Yes, worse than The Invisible Enemy. It's the combination of pathetic villains and in Deadman's case woefully acting with the crapness of Leela's departure as the rubbish cherry on an unpleasant cake.

And that's all I have to say about that.